I may have given up writing posts for my blog for the last few years but I never stopped writing down thoughts, notions and questions rising from my research on everything that could be utilised as notepaper. And as I kept finding these notes everywhere, sometimes acting as a reminder of ideas forgotten and sometimes and rather intriguingly realising that I have been here before, I gathered them all together, ending up with a box larger than I thought I would need.
Apparently, it is time to start writing again, preferable in a more structured manner, and there is no better subject for it than the equinox alignment.

And this September I was unbelievable fortunate weatherwise for although there was no sunrise on the equinox itself but there was a window full of sun and blue skies in the week leading up to the equinox after a most miserable August and September. Making use of this unexpected opportunity I went five mornings in a row to the Grianán, which I had never done before. And what five marvelous mornings I had!

The morning of September 17.

Beam and clouds on September 18.

Second photo of the same morning. 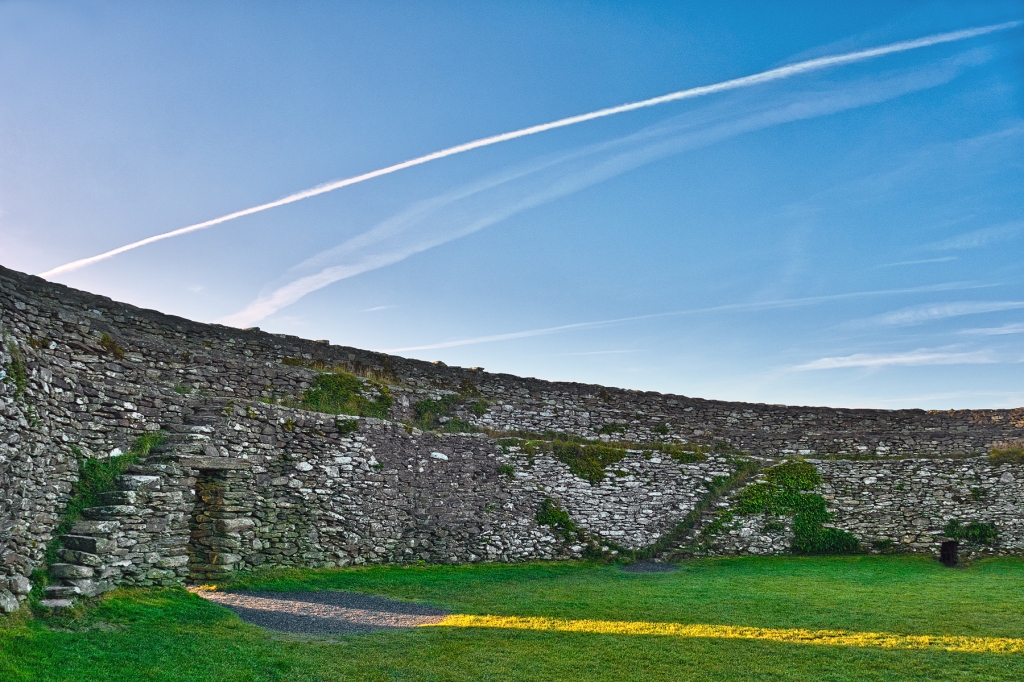 The morning of September 19.

Although a perfect beam came through each morning, all of them were quite different and special in more the one way, including the colour of the sky before sunrise, the variations of morning mist, ranging from patches of mist, thick carpet mist to thin veil mist (haze), creating islands in the process, and so demonstrating how it changes the views from the top of the hill and one’s conception of the landscape below. 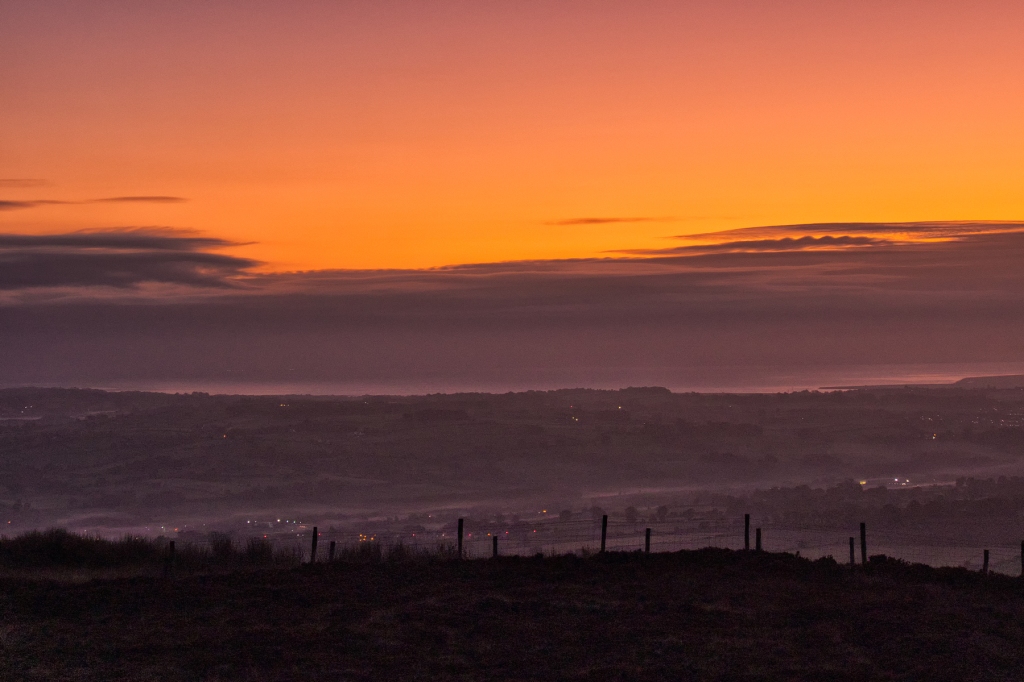 The third morning in particular, September 19, the one with the thick carpet mist, in a most magical manner brought up the matter of higher ground and its importance in the past for the landscape we know is not the same as then.

At 6.49 am, September 19. The ‘island’ in the middle consists of parts of Dundrean and Elaghmore. Beyond that in the mist lies the mouth of Lough Foyle and Magilligan to the east.

Same direction and day at sunrise.

And Muckish in the mist, also on September 19.

Inishowen was an island and so was a rugged patch of hills, somehow floating between a large island to the north west and the mainland of the island of Ireland to the south, housing on one of those hills a very special monument. 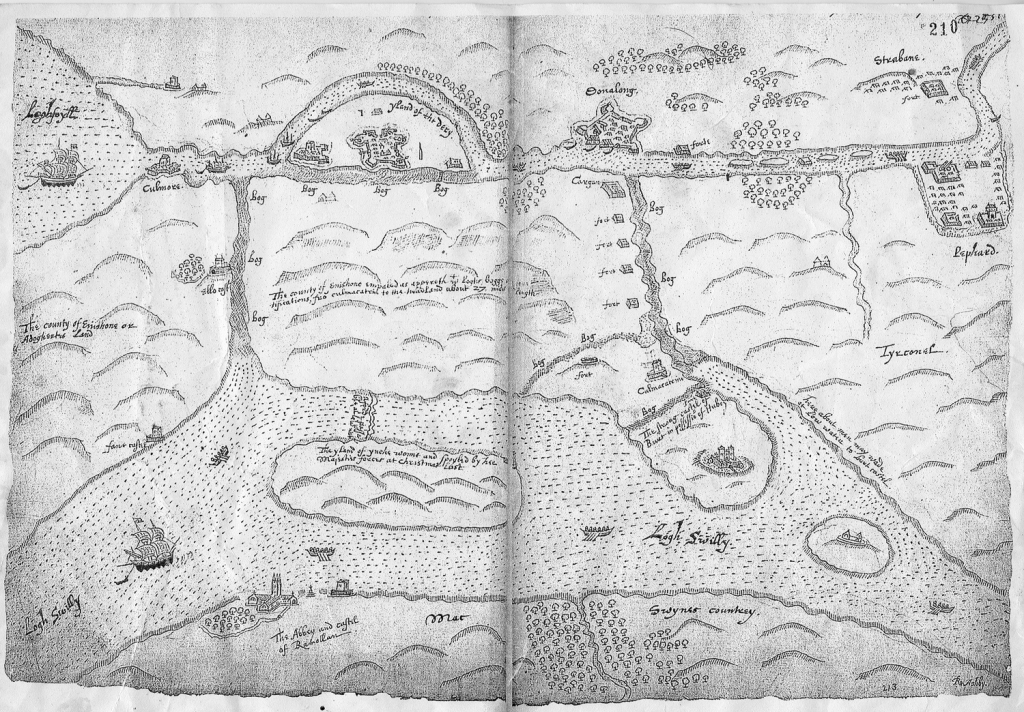 Only 400 years ago, a map was drawn up to document Henry Docwra‘s fortification of Inishowen, showing clearly 2 channels linking Lough Foyle with Lough Swilly, although by that time both channels had silted up and turned to bog. But between the sight of mist covered land on a September morning and Ashby’s map of 1601 it becomes obvious of how much of the low lying areas would not have been there as solid ground in the past, never mind being used for farming or occupation as well as greatly influencing of how travel and transport could be conducted.
And in an ever so gentle fashion, the five splendid mornings raised again the importance of not just researching manuscripts and maps but also being physically on the hill to experience and see with my own eyes when the monument allows moments to glimpse back in time and by doing so aiming for a better understanding of what was once. 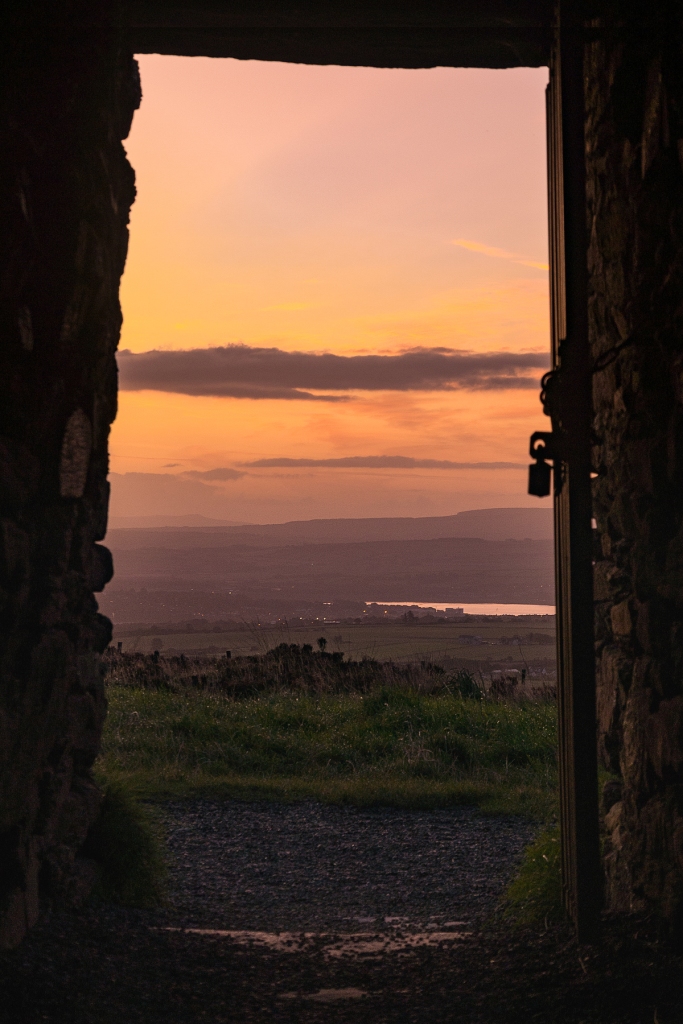 Having observed the equinox for a good few years, experienced the mood swings in the weather and seeing first hand how much difference a few days, either way, can make, I have come to think that there, if not always, but for a very long time, was a plan b to celebrate the time when day and night, light and shadow are equal. With the beam crossing fully, as in reaching what is now the first tier of the monument, for about a fortnight, this is a valid possibility. Impossible to prove but I most certainly would have made use of the knowledge to predict weather to achieve the desired effect, be it an entrance of a glorious golden beam or doom and gloom with not a single sunray in sight.

There was one more and truly remarkable occurrence this September, adding an unexpected layer to a glimpse into the past in the form of my first equinox pilgrim, Joe from Clonmany, on September 21, for his journey was a reminder of a time, particularly the Middle Ages, when pilgrimages were frequently undertaken to improve one’s spiritual well being.
As I entered the Grianán that morning, with the light condition at dawn being rather murky, he suddenly and ghost like melted out of the stones just beside the gate, where he had sought shelter from the very strong gusts, pounding hill and monument.
Being one month short to the day of his 61st birthday he had decided to do this pilgrimage ‘before getting too old’, and so started walking the day before, crossing the Urris Hills via Mamore Gap, following what are now often side roads but used to be much traveled bridal paths, all the way to the Grianán to see the sun rising and a golden beam appearing.
From what he said, he arrived around 3am on what was to be the coldest and windiest of the five mornings. Knowing from experience that there isn’t much one can do when trying to shelter from winds at the Grianán, he must have been standing where I found him for the better part of 3 to 4 hours.
And as the sun rose and a perfect beam started glowing all the way across the monument, he quietly enjoyed its glory for a moment and then quietly and as sudden as he had appeared from the wall earlier, vanished, leaving me hoping he safely made his way home, for I could not find him later when I returned to give the rather frozen man a lift.