A sunny September made up for the misery of March last and offered the opportunity to observe the alignment for longer then before.
The first attempt was made on September 15, although it seemed at first very unlikely but the heavy cloud cover started suddenly to disperse just past 7 am, leaving me still somewhat undecided but nevertheless heading for the hill. I arrived around a quarter to eight by which time the beam was already half way in retreat and I concluded, perhaps wrongly, that the early date must be the reason for it and that the alignment can not be seen fully at this stage. 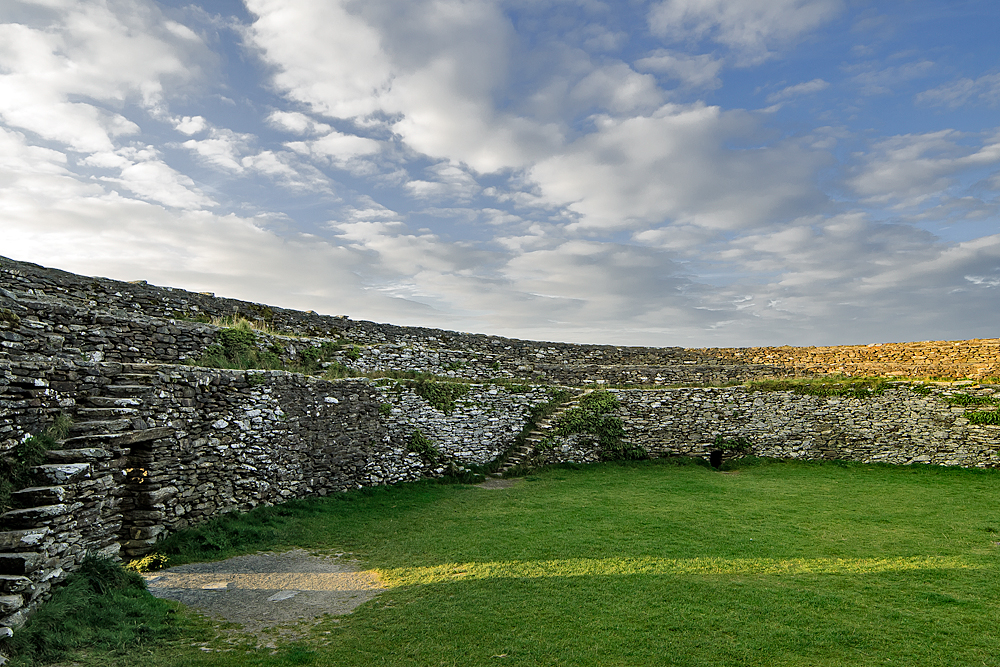 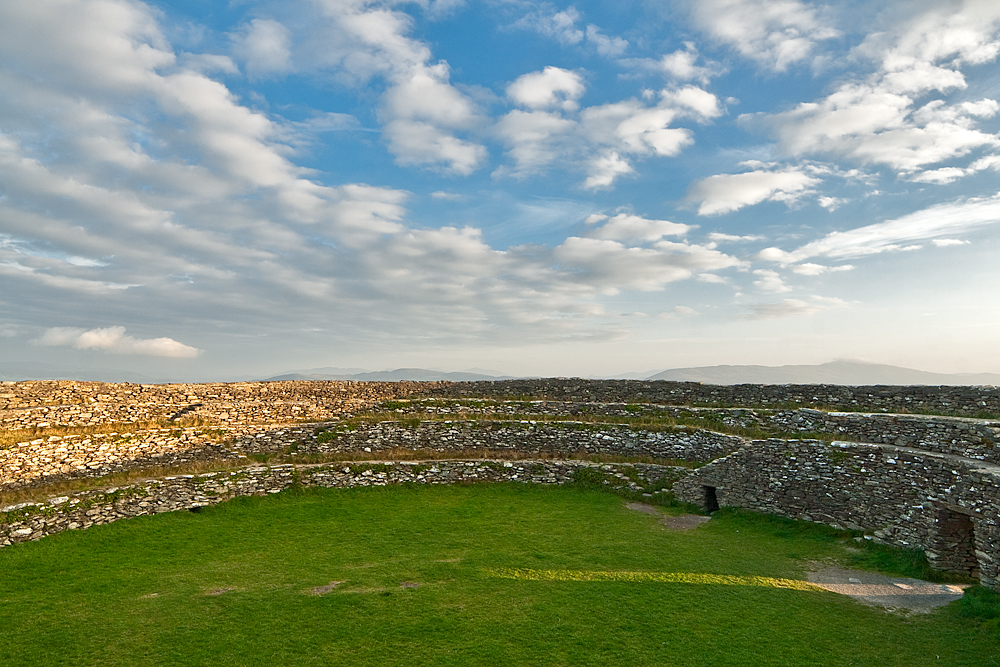 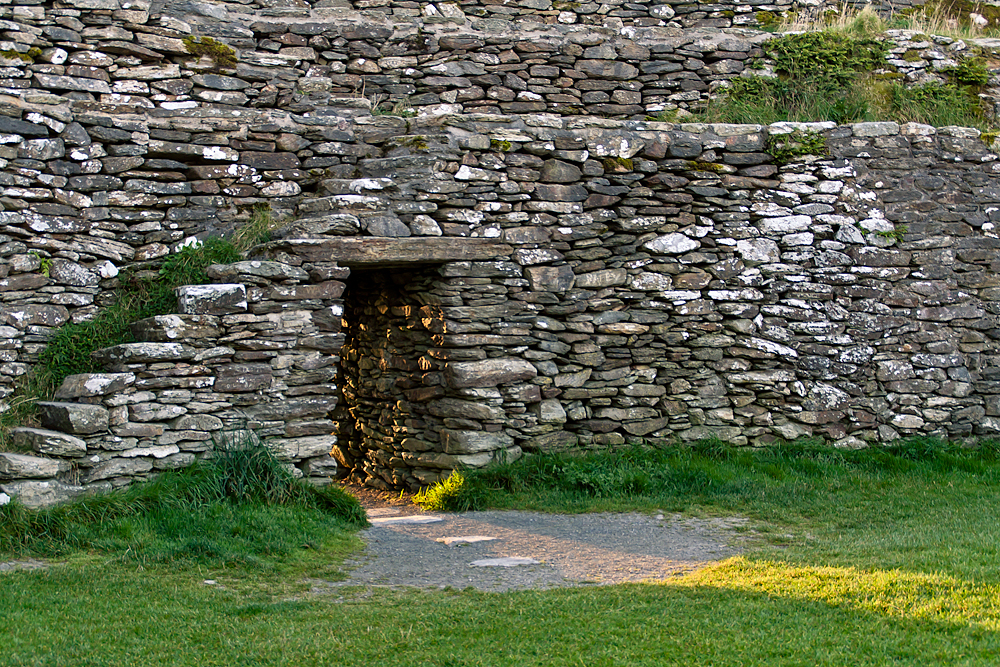 The situation was similar on September 20, clouds obstructed the rise of the sun again until ten to eight, with the exception of me being already there for an hour. 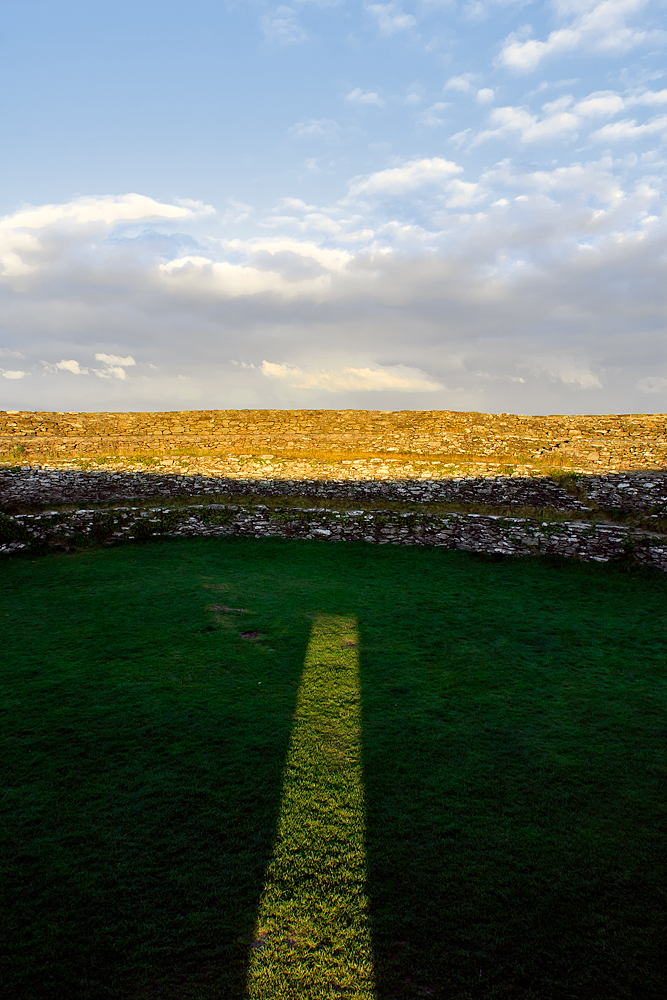 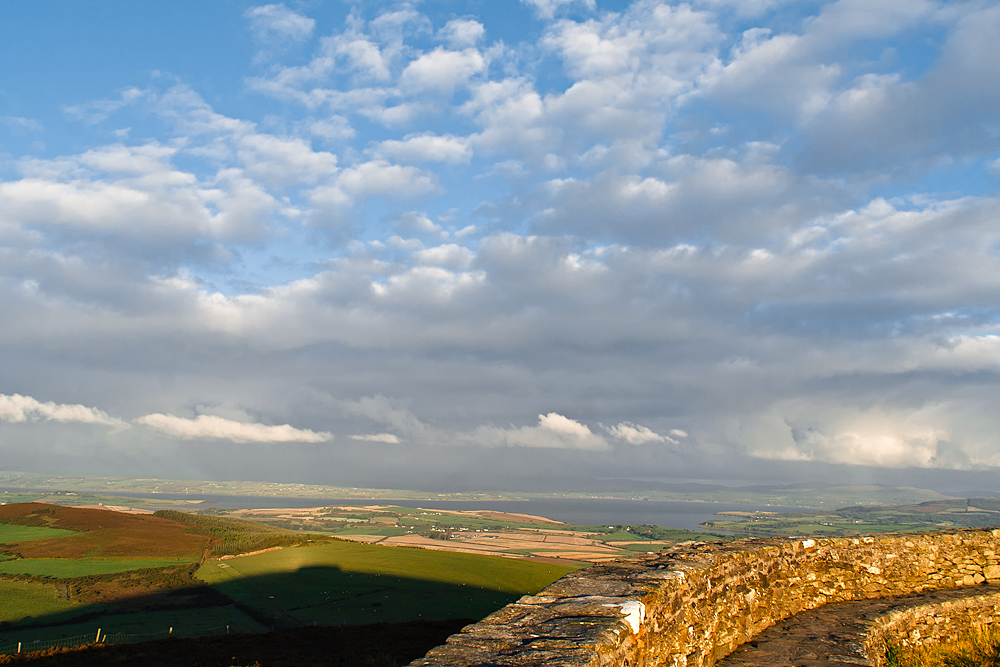 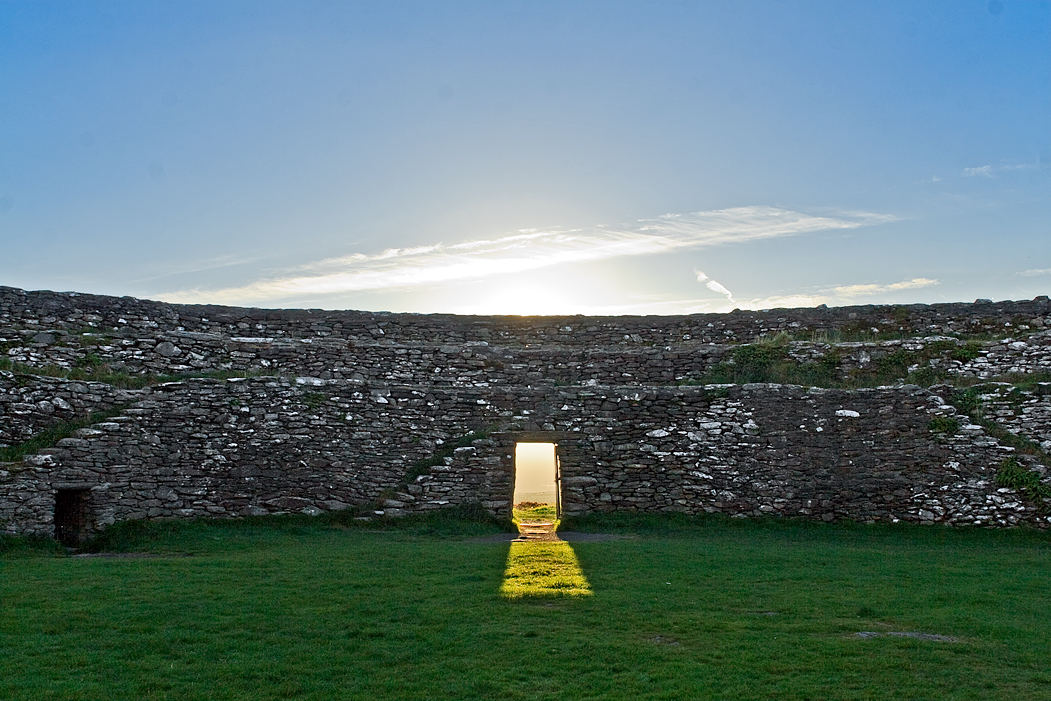 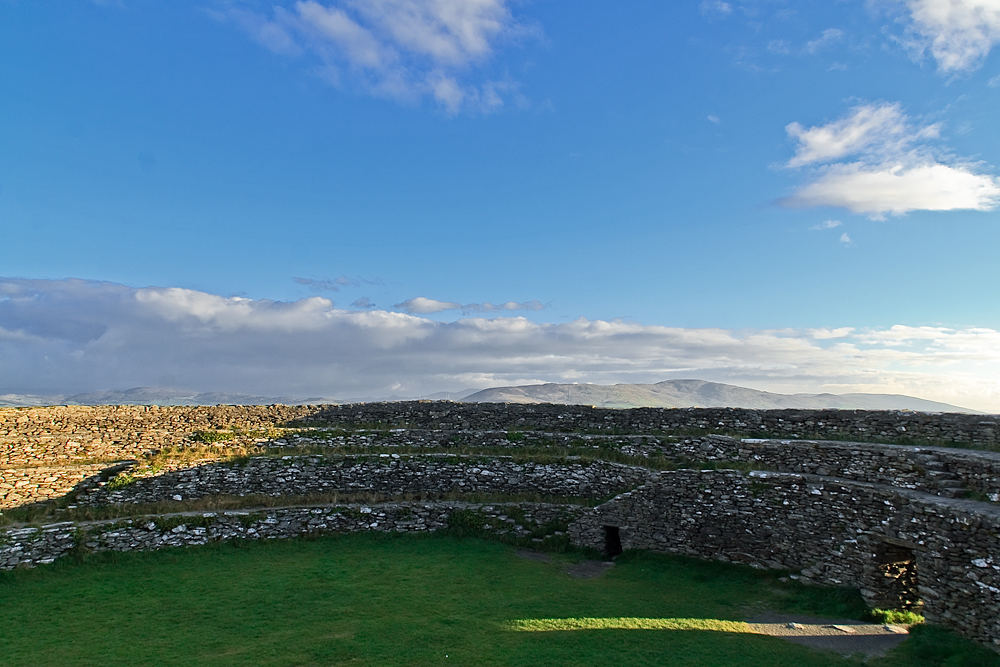 The sun rose in full view and glory the next morning at quarter past 7, by which time my friend Adam Rory Porter had already his camera set up for the most wonderful and fitting time lapse. This time lapse, finally and after three years of sending photos, convinced an important historian that the alignment is for real and will have implications of how the monument is viewed in the future.

This morning also provided us for the first time with the full extend of the alignment from the sun rising to the last rays of light leaving the monument. 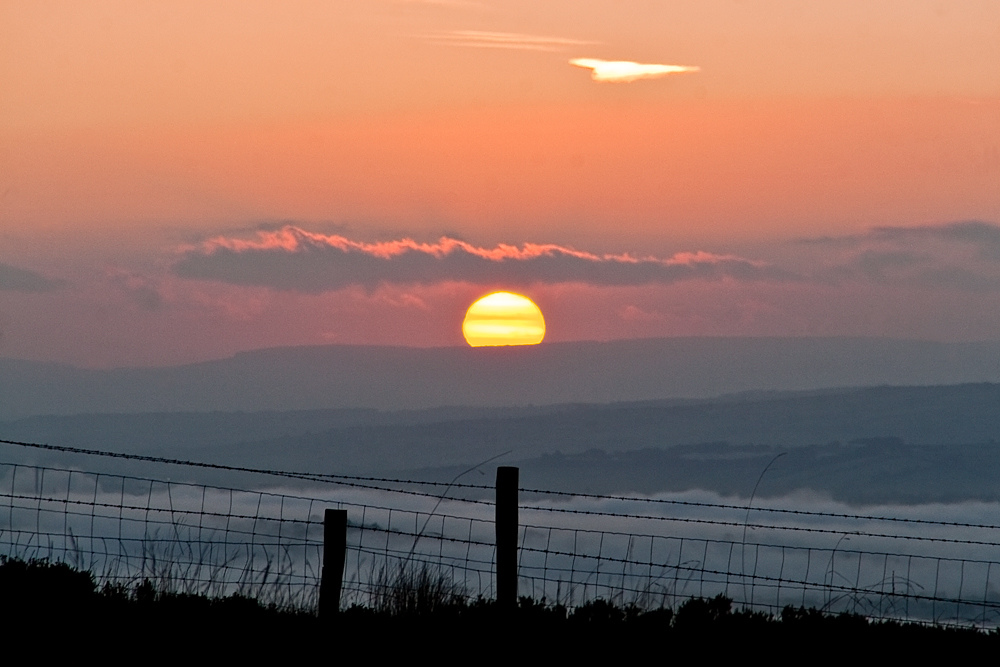 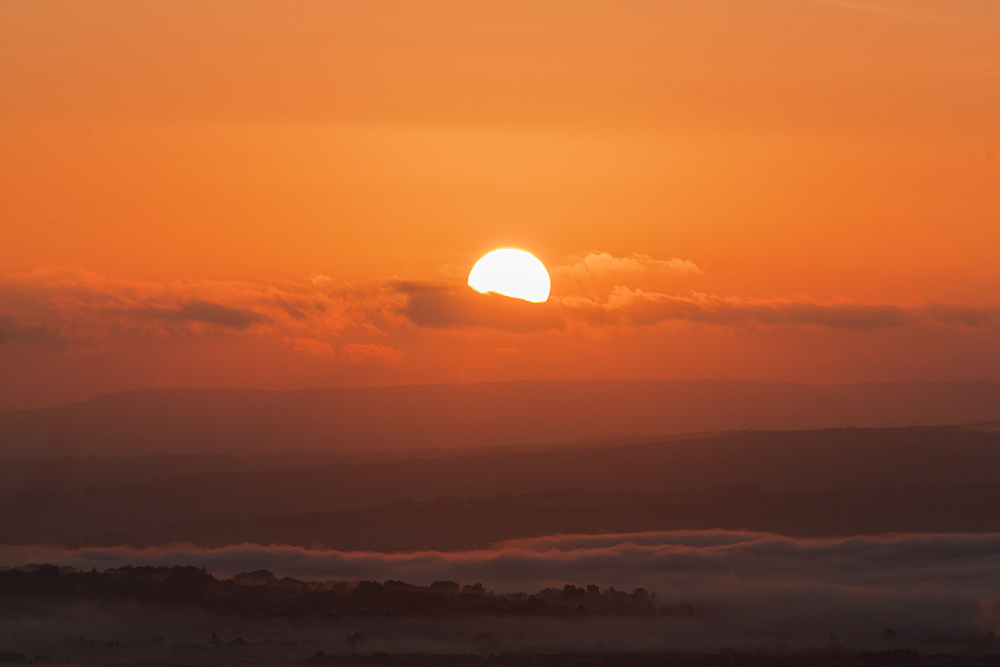 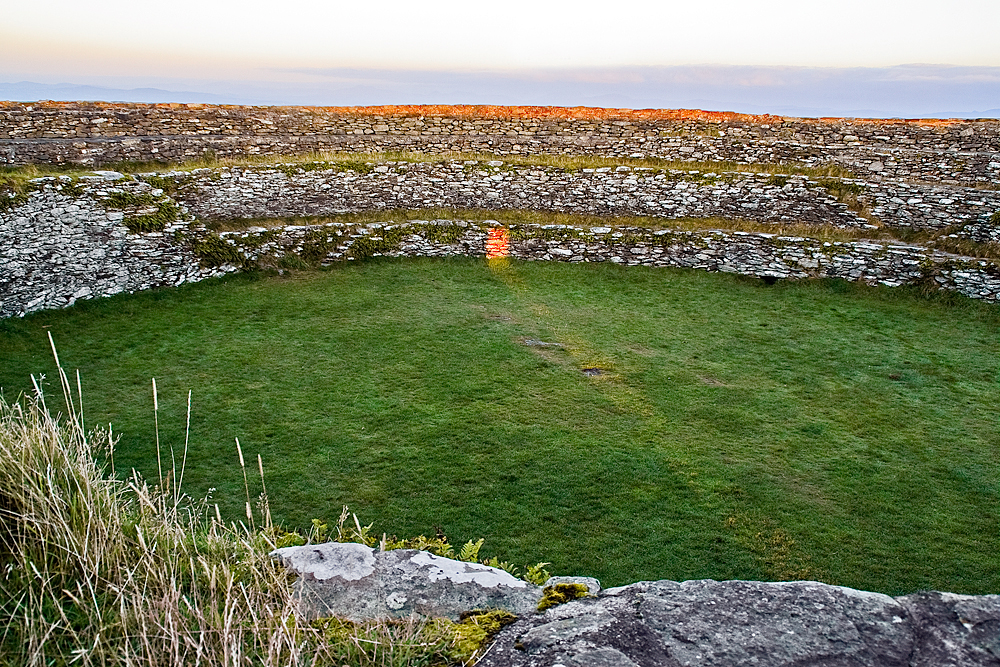 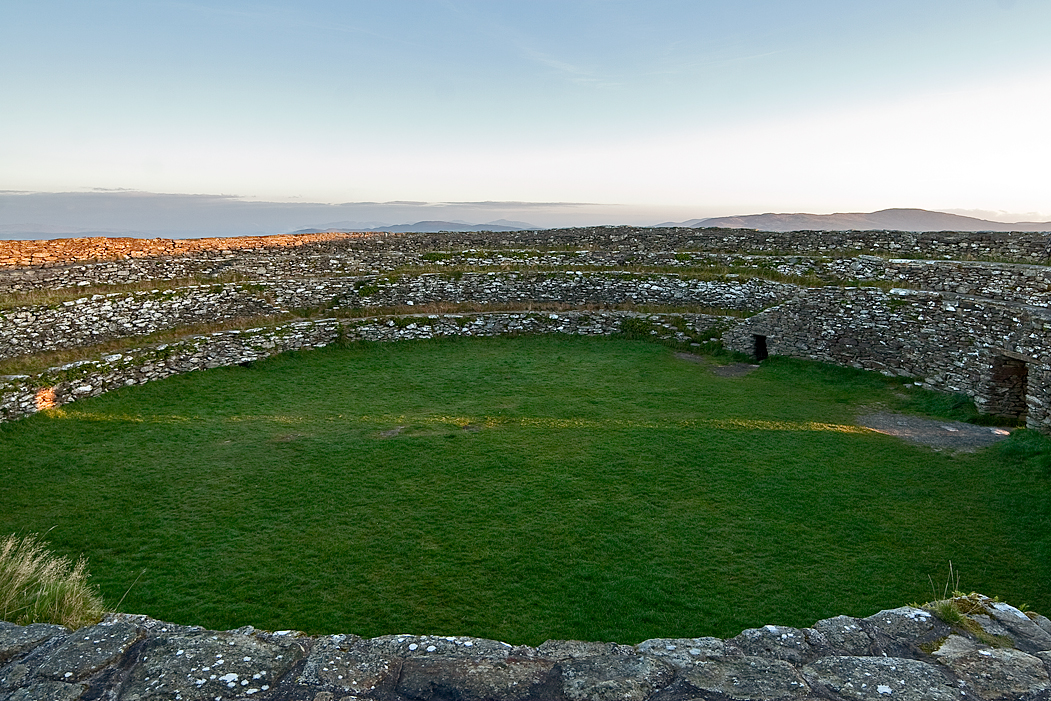 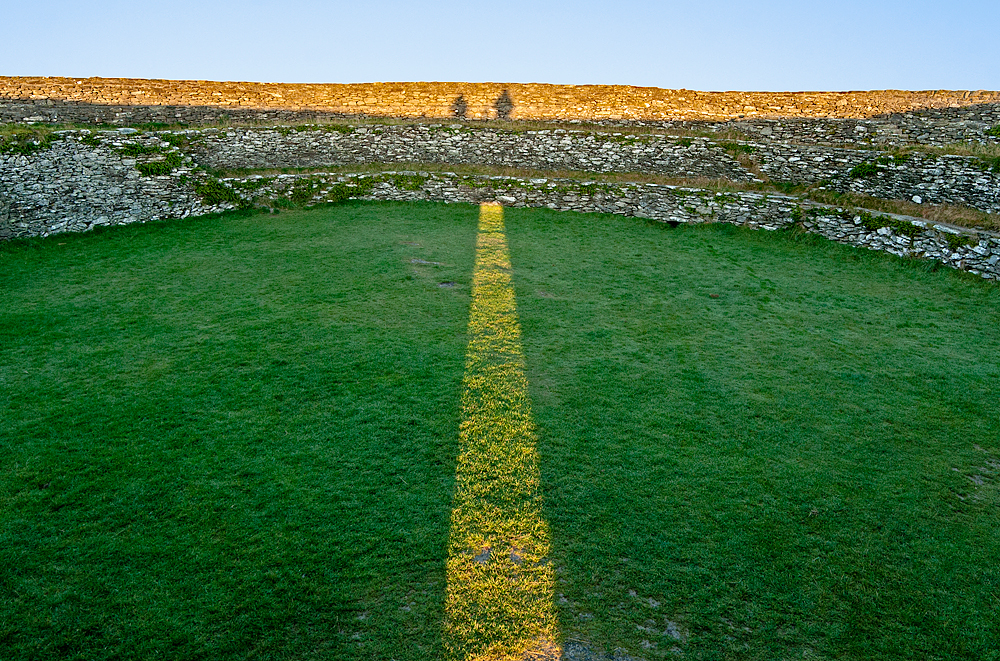 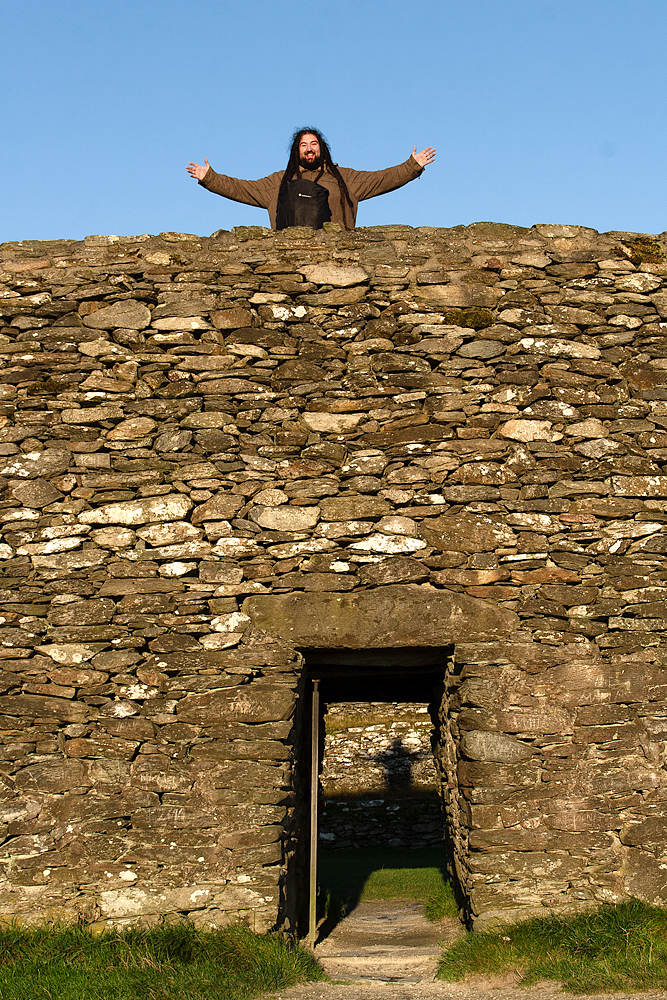 While walking in front of the monument I could see Adam’s shadow pass on the opposite wall inside. So I asked him to position himself and he kindly obliged. 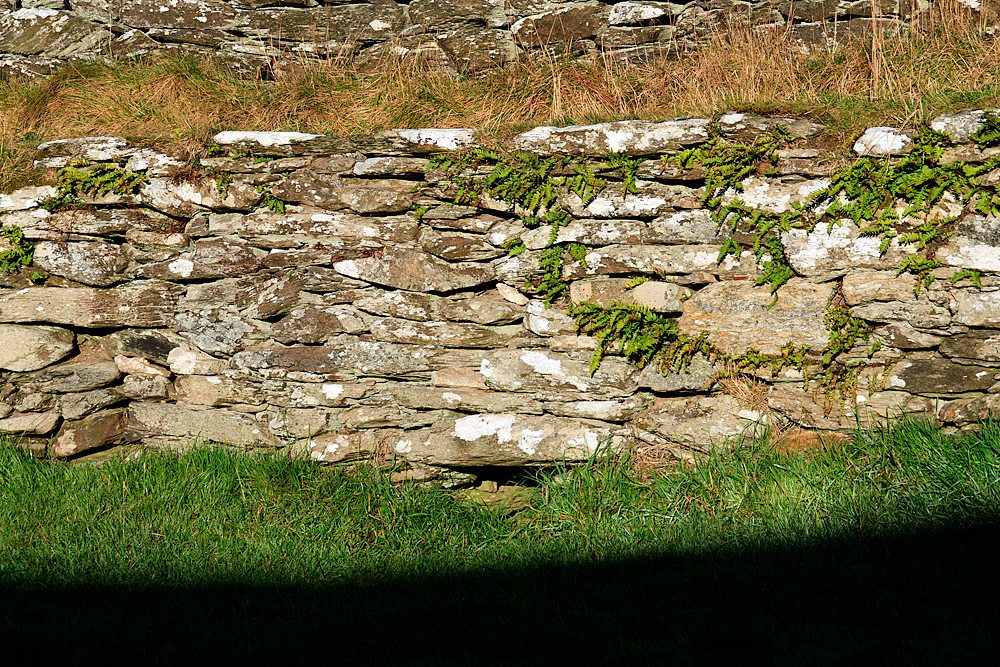 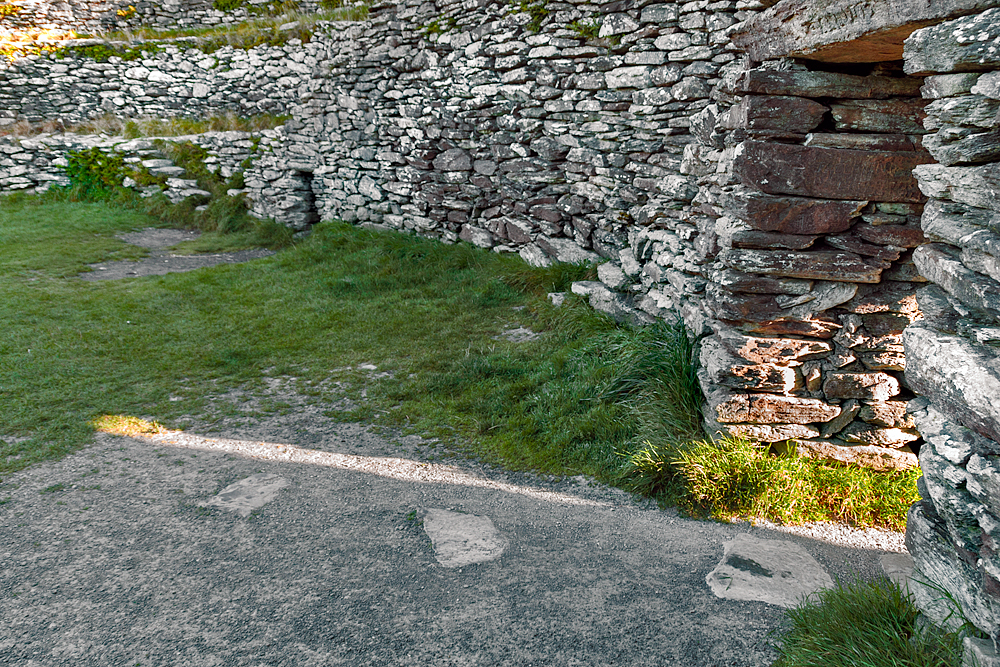 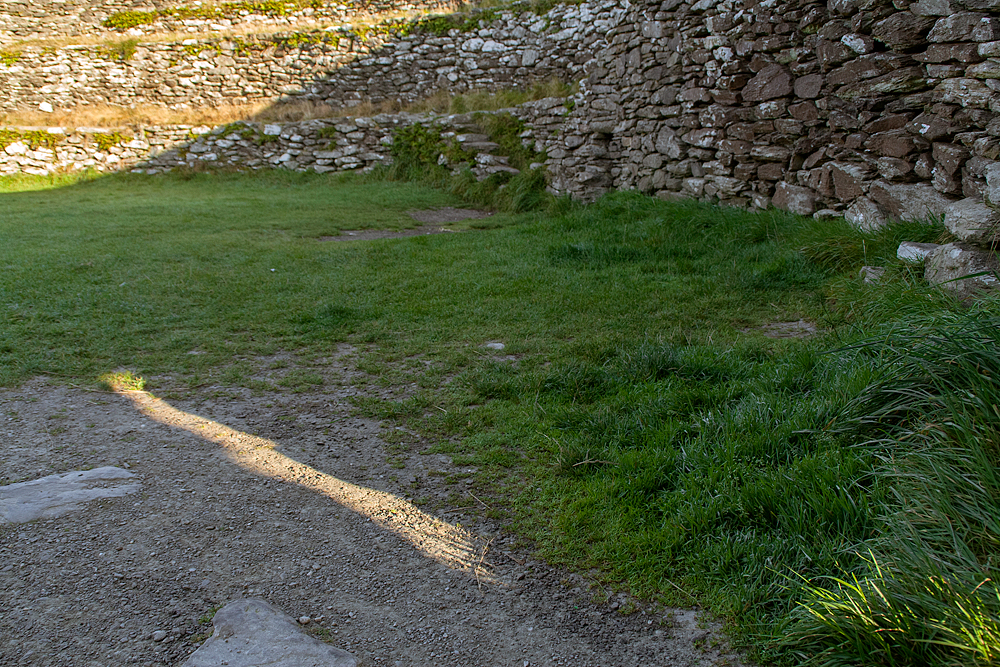 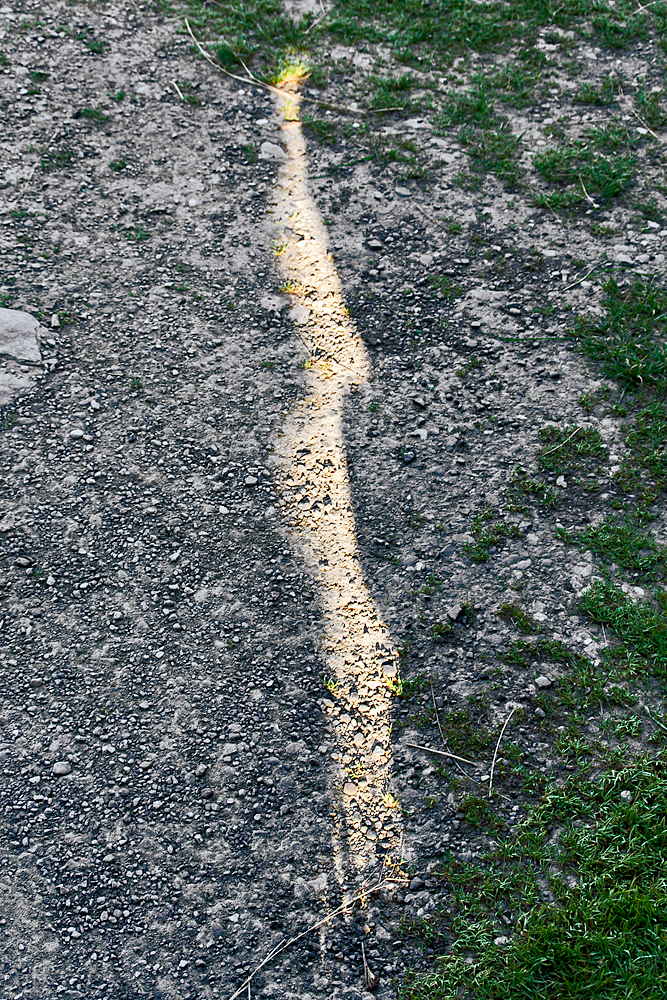 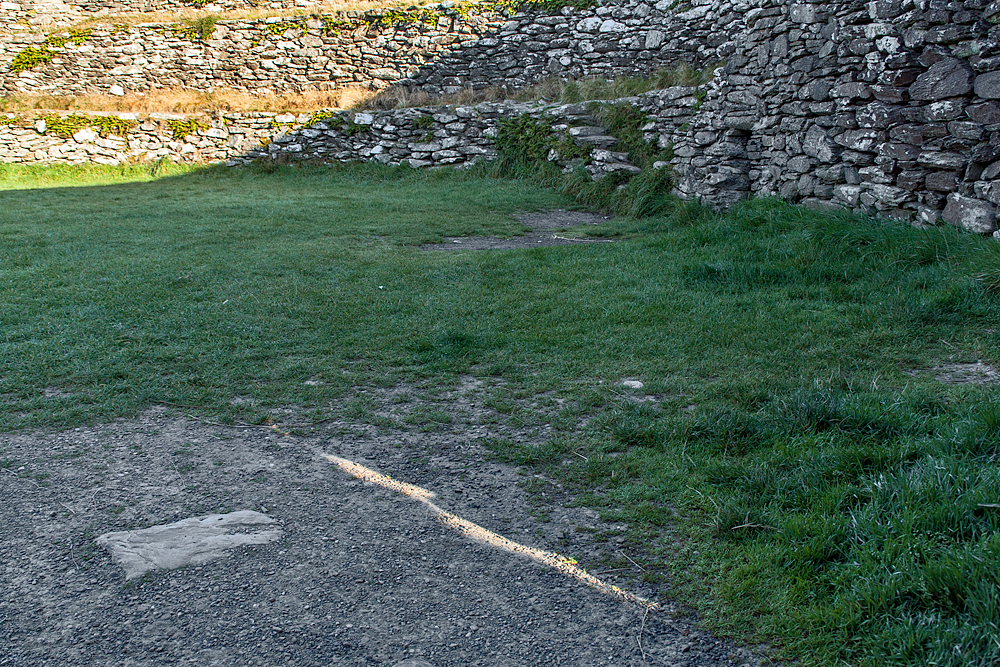 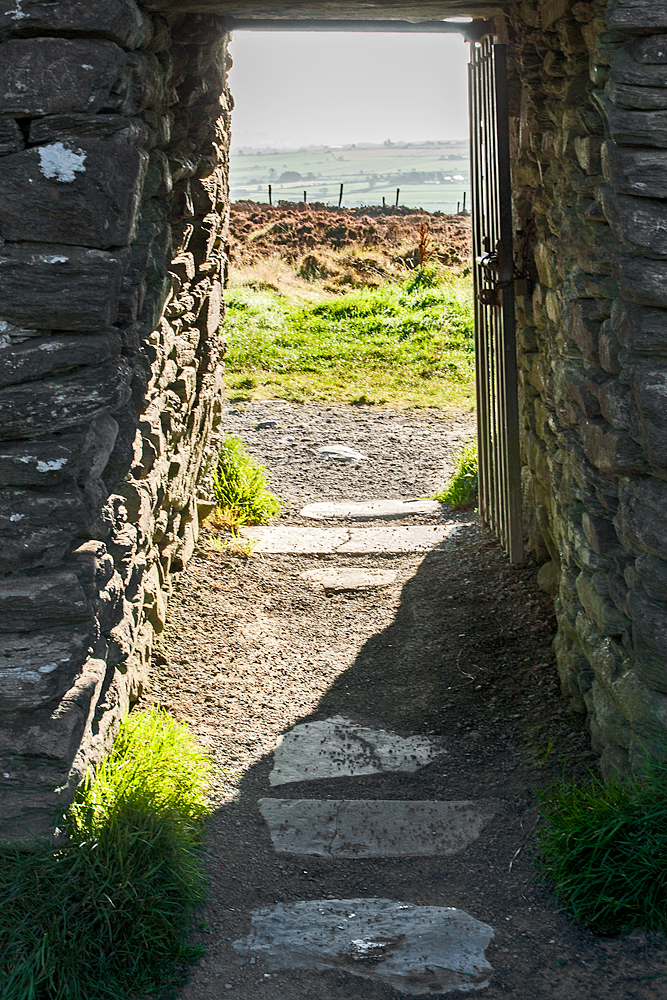 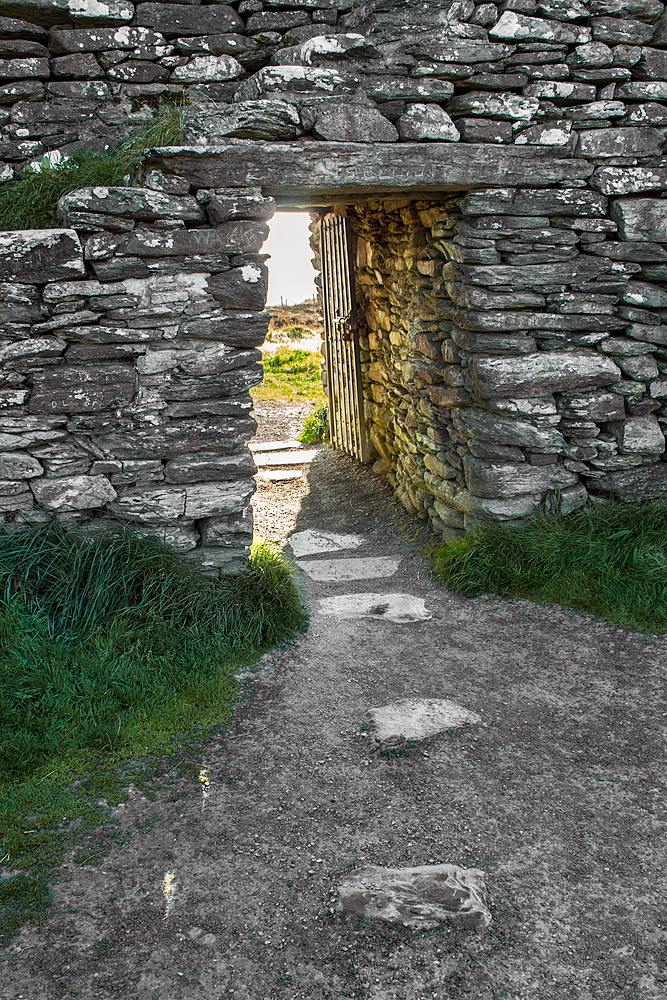 Utterly unable to sleep one night I got up and out on October 2, and must have been at the foot of the hill around 5.30 am. My original intentions were to go up Cornamount Hill to find out if the sun would rise from behind the monument but it was moonless and pitch-black and I decided that such an enterprise was to dangerous under these conditions to stumble across very uneven terrain, deep ditches and barbed wire with only a tiny and fading torch. If I would have risked, not necessarily life, but limp, than I would not have seen the alignment still fully working nine days after the equinox itself. But after nearly two hours in the freezing cold, I could not stay for the duration of the alignment, took only a few photos and left for home, tired, surprised but very happy. 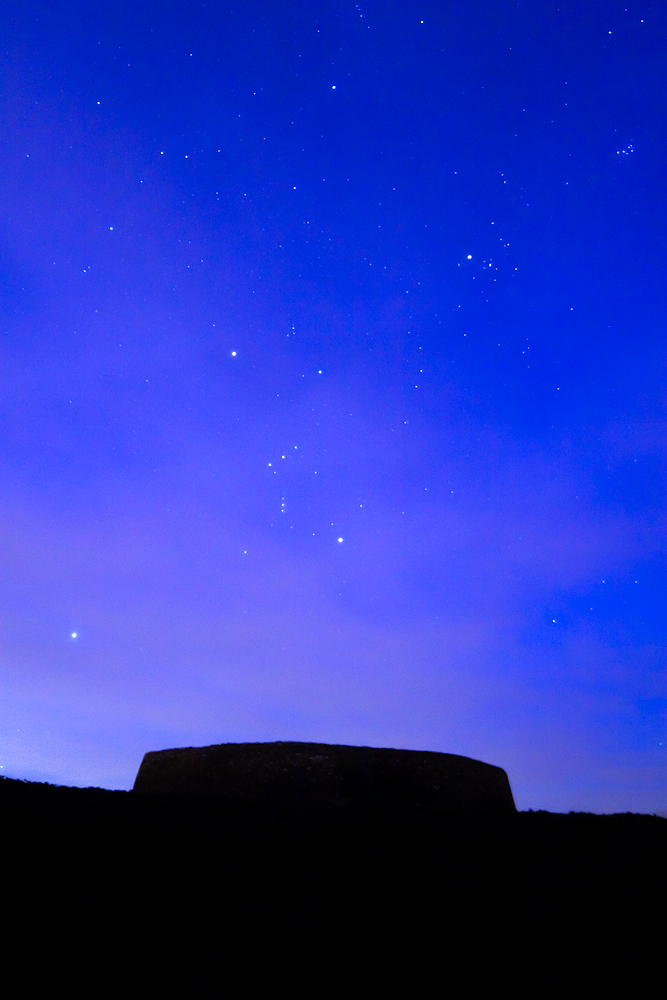 Orion,Taurus and the Pleiades (Seven Sisters) above Grianán @ 6.16 am 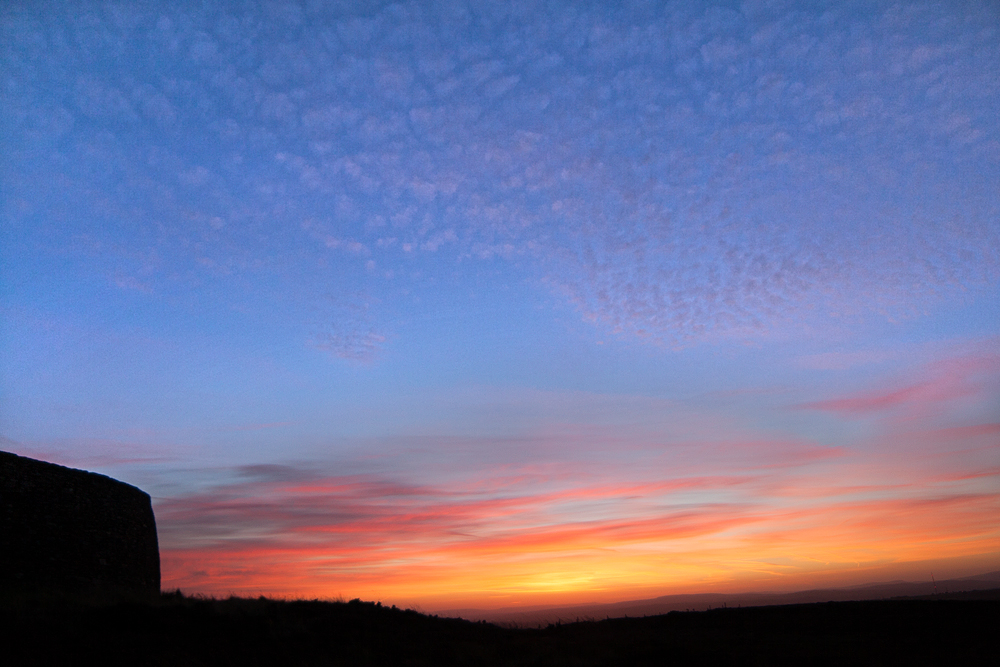 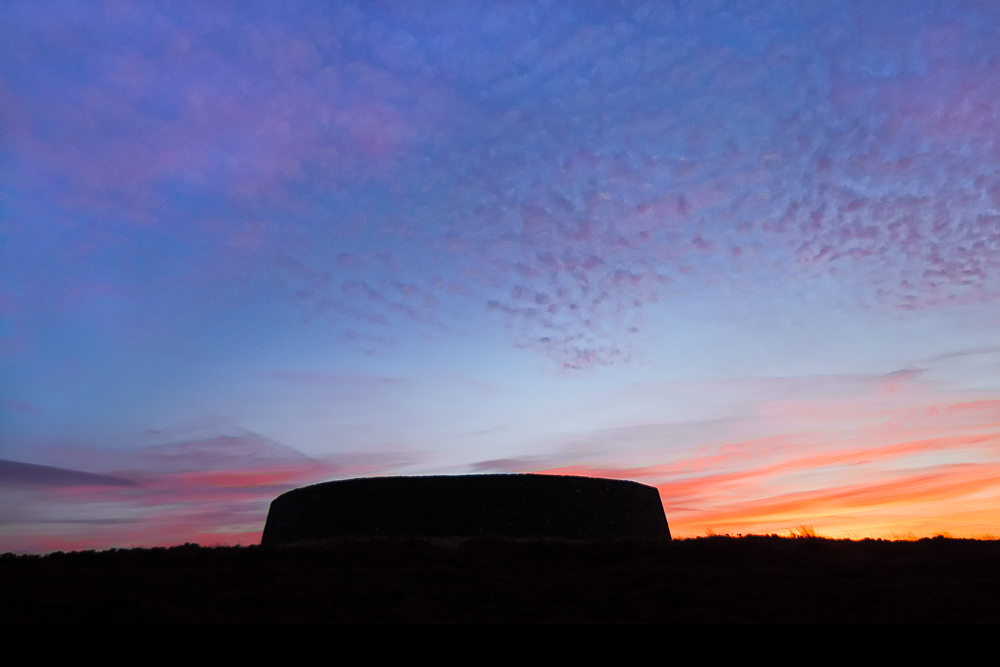 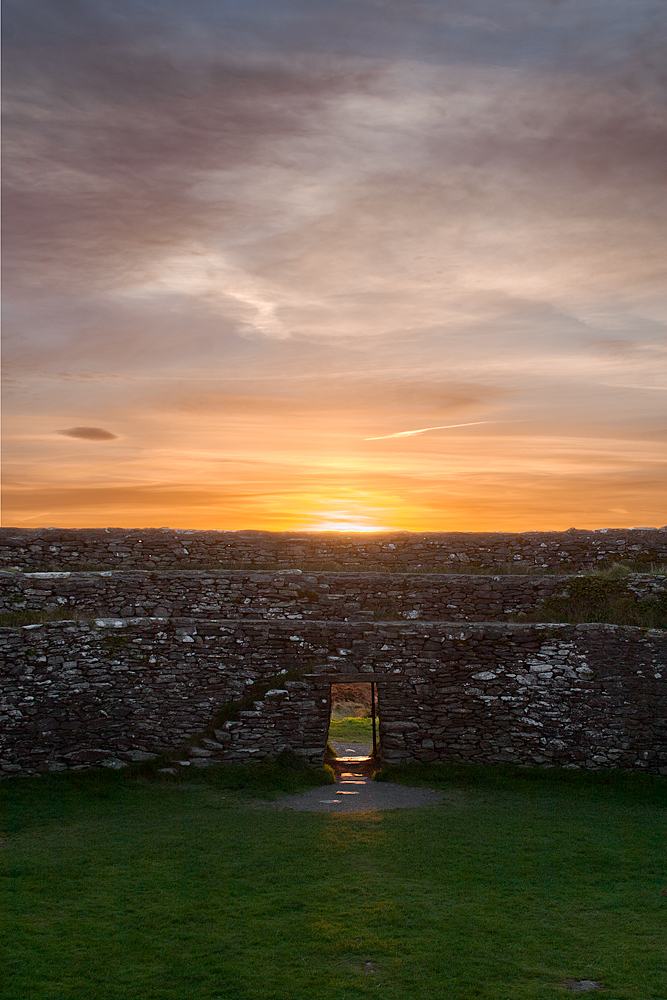 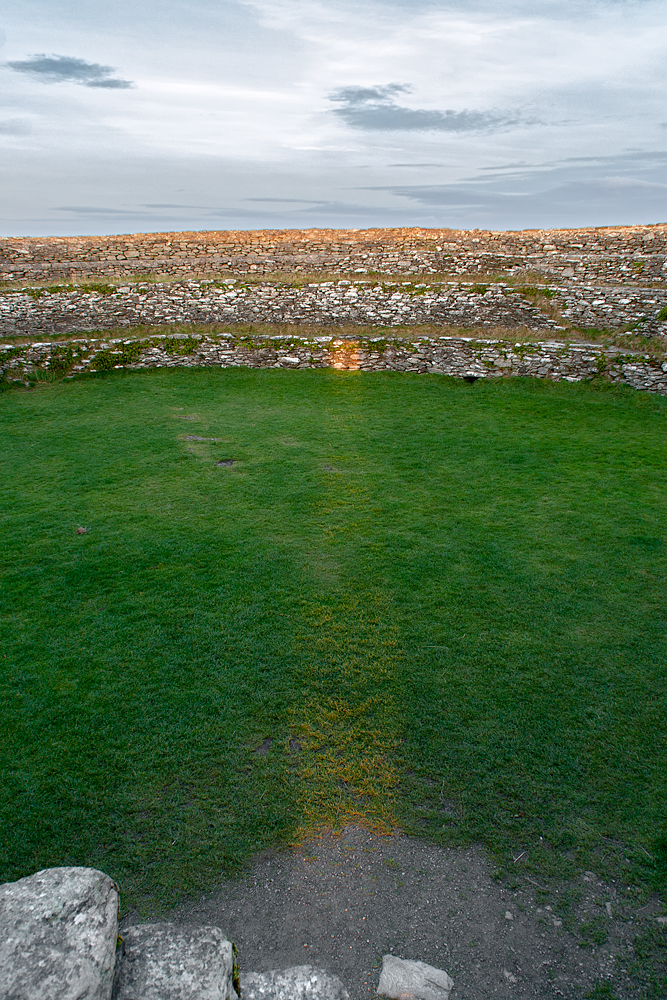 Although the length of the alignment could be broadened at this autumn equinox, the full extent of it still has to be established. It is not known jet when the sun first enters the monument as a partial, reaching perhaps only a metre into the monument, and when the beam can be seen last. The latter evidently will be some date in October. The question is how late. Observations for next year’s spring equinox will have to start at the very beginning of March, if not earlier, and have to be carried out throughout April. Weather permitting. But in a period stretching over two months, surly, there should be a few opportunities.
It is just a somewhat unconventional thought at the moment, but could the alignment in it’s full length, from the very first rays entering to the last ones leaving, spanning the period of three months, the same duration as the summer alignment and therefore marking the beginning and end of a season.