With wintry winds wailing, clouds scattering across the sky like blood rushed warriors into the field of battle and neither sun nor warmth making any encouraging appearance, one could easily remain unconvinced by spring being just around the corner, never mind having arrived.
Fast flying veils of low lying clouds with even more and much thicker further up covered most of the sky on the morning of February 4, leaving only and literally the smallest of window to see the rising sun for a few short moments, having ascended at this point above the hills of Derry, and right beside the mast of Sheriff’s Mountain. 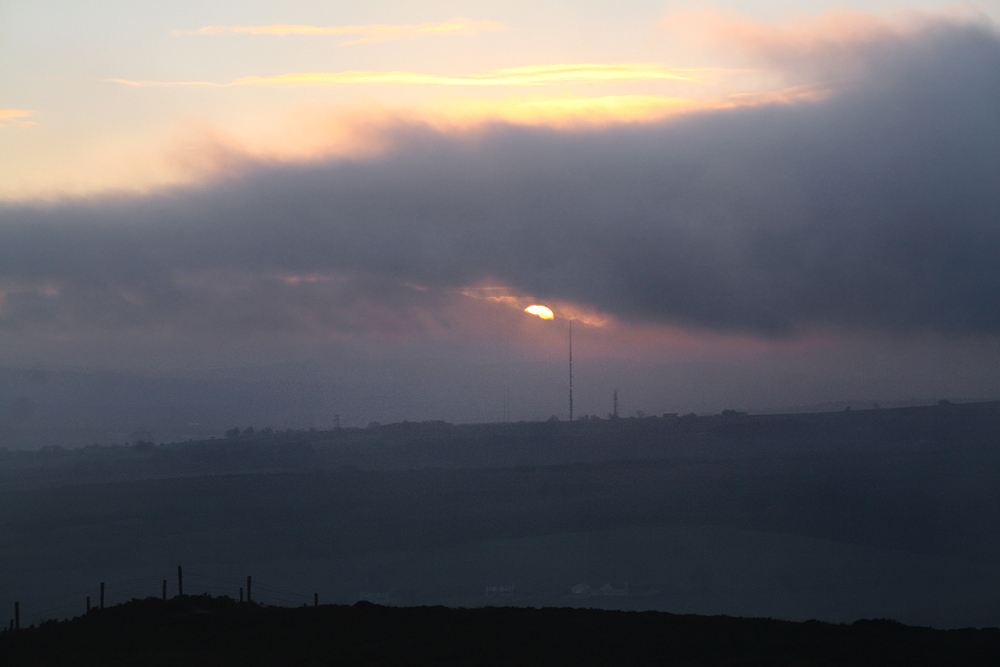 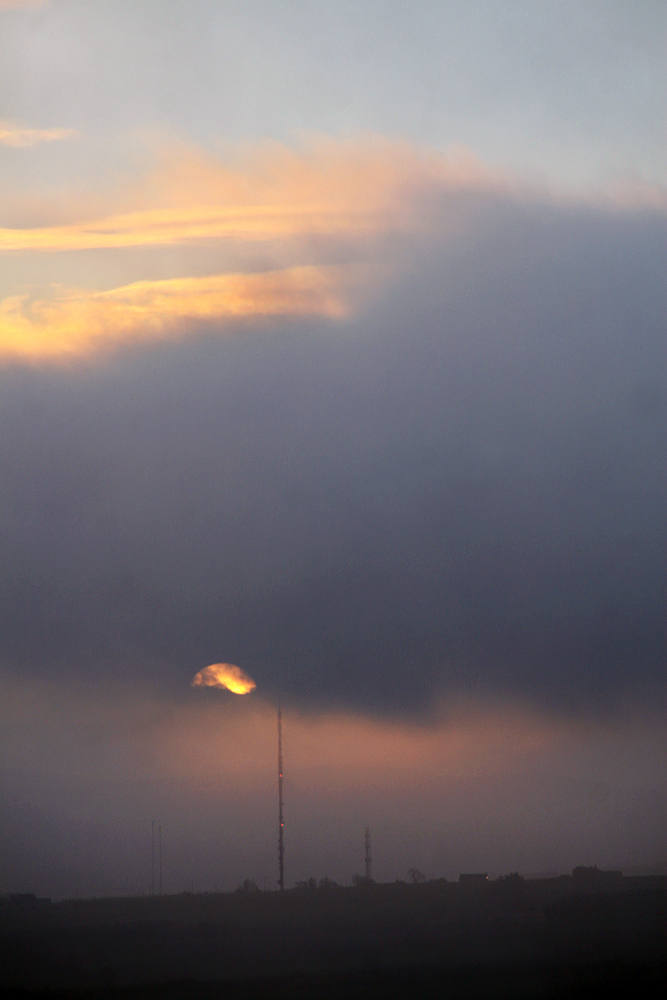 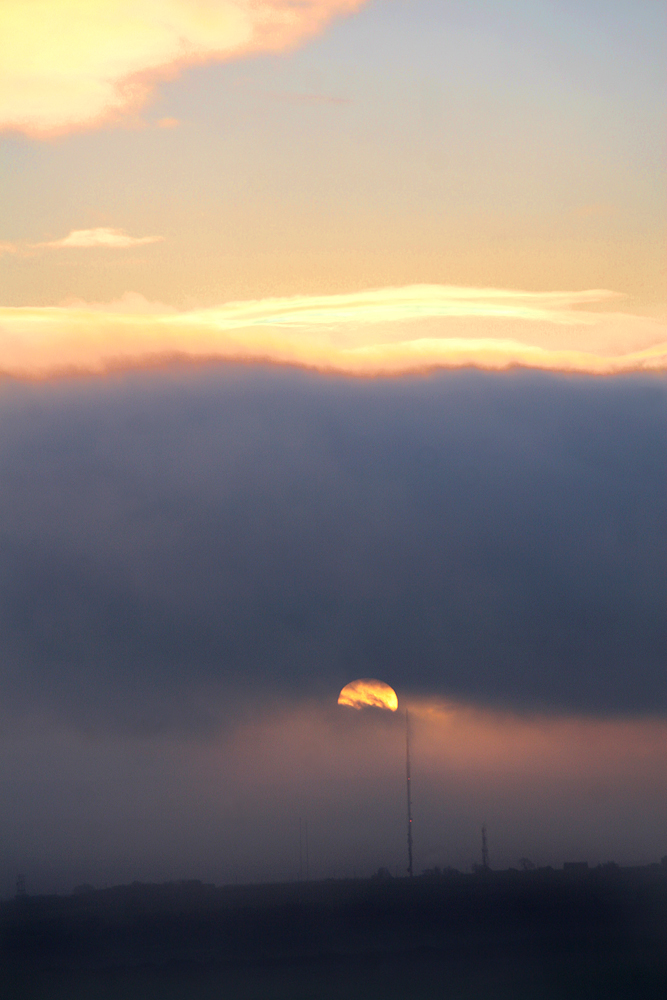 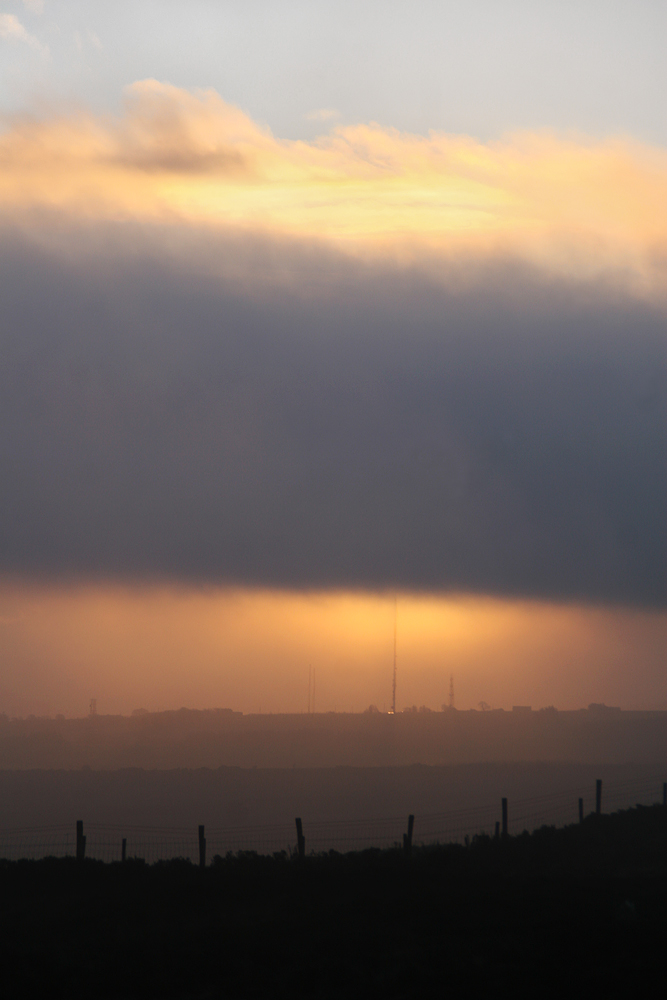 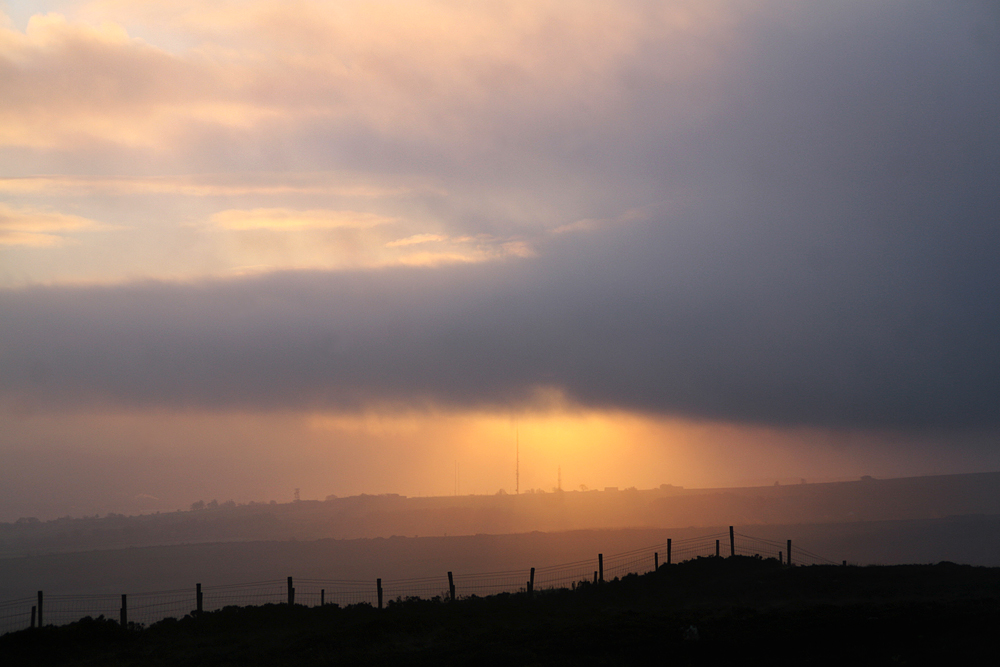 It occurred to me that my much lamented clouds reflect almost perfectly the shrouded circumstances in which the monument finds itself now, bearing the wrong name and therefore being assigned a past, it could not possibly have had.
Having read through a considerable amount of sources available for the last few years, I was unable to find any further information about a place called Grianán of Aileach past George Petrie’s stern addition to the Ordnance Survey and the Annals of Four Masters, with the exception of one poem of rather dubious origin, which contains in its entire and considerable length two segments, displaying grianan and Aileach. The poem is called The circuit of Ireland, by Muircheartach mac Neill, prince of Aileach and was allegedly ‘written in the year DCCCCXLII (942) by Cormacan Eigeas, chief poet of the north of Ireland.’
The two sections are as followed:

John O’ Donovan’s translation (p.25):
Thou hast brought them all (hostages) into Aileach
Into the stone built Grianan [Palace] of steeds

The choice of translating ‘is in grianan gall groidheach’ into ‘the stone built Grianan of steeds’, emphasising grianan as a palace, is an awkward one and JOD seems to have struggled with it as well, see footnote for 4 Grianan, pp. 26, 27. His insistence on grianan being stone built and a palace is unhelpful and he would have known from his work on placenames during the Ordnance Survey that grianan has been applied to a multitude of places, which are often not even a building, see below.

JOD (p.49)
Came with us, as a hostage, without a bright fetter,
Into the green palace of Aileach

Within this context grianan is a place where people can be assembled and therefore it seems more likely that a grianan is in this sense neither necessarily stone built nor a palace or part of the name of this royal seat but an area, a field perhaps, annexed to it, where people could gather and where Muircheartach of the Leather Cloaks would have had no spacial restriction making his selection of the thousand warriors for his winter tour of hostage taking. The word usually used for a ‘green or lawn in front of a fort or residence or church; an open space in or before a city; public square, courtyard’ is faithche (eDIL), and the poet may have just grown somewhat tired of using the same word or felt inspired or adventures enough, replacing it instead with grianan, by no means a large leap of imagination, signifying in general a sunny spot of some description like hills and mountains, lakes, townlands, buildings, horse paddocks and bleaching greens.

The perceived or real existence of such a green at Aileach is at least attested twice. A ‘little legend’ attached to the poem itself and of unknown origin and date, explaining the manner in which Muircheartach chose his champions, uses the following phrase:
pupall dus fuargaib for an b-faitche – erected a tent on the green (at Aileach, p.20)

Another instance can be found in the tale of The Banquet at Dun na n-Gedh (pp. 36, 37):
… I delayed not until I reached Aileach Neid, where the king held his residence at that time. The king came out upon the green (faichti), surrounded by a great concourse of the men of Erin, and he was playing chess amidst the hosts. And I came into the assembly (dail), passing without the permission of any one through the crowds …

One poets grianan may be after all the green or courtyard of a less imaginary perception and so Muircheartach took the hostages of Inis Fail, brought them all to Aileach into the unfamiliar assembly field rich of horses.
Gall taking here its broader meaning – foreign, which most certainly would have been the case for the hostages collected from different locations throughout Ireland. Being called rich of horses/steeds is, as John O’Donovan indicated, intended as a symbol of higher status and mark of respect.

More inconsistency, apart from the elaboration of a word by one poet and/or a probable misunderstanding of grianan, can be found when looking at the circumstances surrounding the poem. The ingenious architect of this composition may not even have been Cormacan Eigeas, as claimed. Research into the origin of the poem at the University Cork College indicates otherwise, reaching the following conclusion in the profile description:

This would put the date of the poem over half a century after the destruction of Aileach by Muircheartach Ua Briain, King of Munster, in 1101. And by this time and for this reason the Mac Lochlainns had moved their residence to the Isle of Derry.

Not one compiler of annals nor any other poet or collector of lore and legend ever employed the name Grianán of Aileach in any of the surviving texts, prior or past the compilation of the Annals of the Four Masters until George Petrie‘s interference in the Ordnance Survey of 1837. Perhaps, because it was not a logical conclusion to be drawn from the lines of the poem and maybe it remained unknown, for there are only two copies in existence, with no original left, claiming to be the work of Cormacan Eigeas, and both of them are in the hand of the same man – Cú Choigcríche Ó Cléirigh, one of the compilers of the Annals of the Four Masters.

Since there is so far no evidence of the use of Grianán of Aileach in any other documentation, it has to be suspected that Cú Choigcríche Ó Cléirigh was the driving force in renaming, occasionally, the dun or rath of Aileach, which more often is just called Aileach, with no or little indication if a building or a territory is implied. He also inserted a copy each of the poem between the sheets of his own work,  the O’Clery Book of Genealogies, and his copy of Mícheál Ó Cléirigh‘s version of the Lebor Gabála Érenn, in which the poem is not included. Such coincidence however, and even under the most forgiving circumstances, must look slightly suspicious.
It can be therefore assumed, at least until proven otherwise, that Cú Choigcríche Ó Cléirigh created Grianán of Aileach. The placing of it on the summit of a hill, then known to the locals as Grianan Gormlaig, would be left to another confident scholar two hundred years later, the ever so insisting George Petrie.

The vice of poetic license does not seem to end there but may even have penetrated the core of Aileach itself, a name, I thought, I never would doubt, despite the various spellings and the odd disagreement over the first letter being an A or O within the same poem. Reading Muirchú‘s Life of Saint Patrick, Tírechán‘s account of it and Adomnan‘s Life of Columba, the earliest sources available, 7th and 8th century respectively, concerning the lives of the saints, would question such presumption, for there is no Aileach to be found either near Lough Foyle. A most unexpected revelation, but the fact remains that neither author seems to have been aware of such place, which should, if this name was in use at the time, been known to them. If they did, their failing to mentioning it, can only be followed by why. But a local Aileach nevertheless would appear soon on the horizon and the pages of annals and poems, in which also Eogain son of Niall of the Nine Hostages was introduced amongst a placename, which was not there before, making a first appearance, as far as I could trace it, in the narrative The Tripartite Life of Patrick, composed probably around 900 AD, perhaps even later (Eogain and Aileach starting at p. 151). To make matters even more confusing, in it are several Aileachs, seemingly celebrating or enforcing the usage of this word, which probably signifies a seat of a chieftain or king, petty or otherwise, worthy enough to be mentioned, with one being visited by Patrick after leaving ‘Tír Eogan na Inse’ called Ailech Airtig in Connacht belonging to Cenél Enda (p. 157).
The Tripartite Life of Patrick was written just before annals started recording kings of Aileach for the next two hundred years, with the exception of Muirchertach Mac Erca (died c. 534). But then he has always been a strange one, named after his mother, which was more a Pictish than an Irish custom.

This tampering with truth reminds me of a brilliant article, I read some time ago, by Jacqueline Borsje about Crom Cruach and the alleged human sacrifices made to such an abominable idol, which proved that the dreadful deed, said to have been committed by the Irish pagans, could not be found in the earliest of sources but in later additions, which, of course, got more colourful with every passing poet, and were in their oldest accounts based on two quotes from the Bible, neither of which had anything to do with Ireland or any possible sacrifices made at the time of Patrick’s arrival on these shores.

Constantly confronted with discrepancies at every step of my research, it sometimes does feel like Schliemann and Troy in reverse. He went out to seek a place of legend, assumed to be solely born out of the mind of a poet. Anyone in search of the past behind the monument called Grianán of Aileach, the kingdom taking its name from it and of the people inhabiting it before, at and shortly after the time of Christianity’s arrival, has to journey beyond ornate intentions of dynasty building in minds, medieval and contemporary alike. The reshaping of the present then, by the means of the pen, altered profoundly our perception of times, events and people past and as such our own. As fond and familiar memories they have grown to be a part of us, fiercely defended when wild versions disturb the slumbering peace. But that should be the future, understanding the untold and forgotten parts of our past and let get the truth in the way of a good story. A wise Roman once said: The knowledge of a thing is lost, unless you know its name. Unquestionable in my mind, this applies to a Grianán of Aileach, that never was but nevertheless a place of great importance by another name.
An indication that there could have been something more and something different, at least as remarkable and proud as tales told, may have been left in two of the oldest surviving poems, concerning a lost kingdom in Lough Foyle.

Sunsets still elude me and when needed are as hopeless to come by as even a faintest silhouette of Aileach and a history, which should be there and traceable, but may have just left, close to absolute elimination, the pages of our past as well as the will in our hearts and minds to look for it.

But then, spring perhaps, for any misnamed Grianán and Aileach, may just lie beyond the poet’s bend.