The Hopi call the moon ‘The crazy man with no home’.
An abode, however, for this curious wanderer can be found at the Grianán, when its light enters the inside of the monument – every 18 and a half years.

Being, as most people are today, rather unaware of the importance and movements of the moon, I did not even remotely consider a possible lunar alignment of the monument. A documentary, I watched last year, ‘The Mystery of Chaco Canyon’, (no longer available online) fortunately and as it would turn out just in time, changed this limited and somewhat solar orientated mind of mine and it occurred to me that such possibility may also exist for the Grianán. I soon settle on moonrise and the idea of a slightly paler but otherwise perfectly similar repeat of the equinox alignment. As it became clear later, I was not the only one reaching this conclusion and at the September full moon a few wonderful people from Donegal had gathered, hoping to see precisely the same. 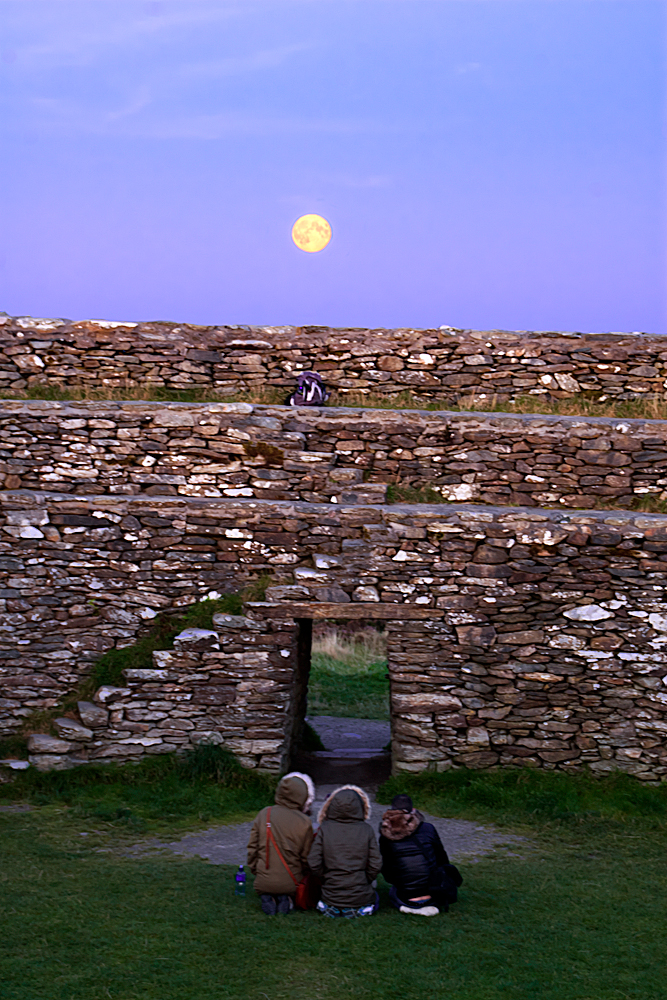 Waiting for the light, September 9.

In theory the moon should create a beam of light travelling through the entrance across the other side of the wall but with barely any knowledge of previous points of moonrise, it was impossible to tell, when this would happen, if at all.
As with the sun, any demonstration of light is only an alignment when it appears on certain dates. During the solar year these points are the eight ancient festivals, the two solstices, the two equinoxes, Imbolg, Beltane, Lugnasad and Samhain. If a display of light occurs at a monument any time in between, then this would make it a coincidence with an undesired, if nevertheless spectacular affect but not an intentional alignment.
But where the sun provides eight such dates, the moon only allows two with a much greater time span to cross. These points in the lunar cycle are called the major and minor lunar standstill. Their solar equivalent are the solstices (sun standstill) and represent the most northern and the most southern point of rising, which also dictates height and extent of the arc.
The major lunar standstill is the moon’s northern extreme and therefore can be compared with the summer solstice. Vice versa the minor lunar standstill represent the southern extreme of the rising of the moon with the winter solstice as solar reference.
But while the time between two summer or two winter solstices spans 12 months and from one solstice to the other six, it will take the moon 18 and a half years to get from one major or minor lunar standstill to the next and 9 years 3 month from the major to the minor standstill.

With not a trace of moonlight entering the gate at the full moon on September 9, and having risen seemingly to high at the onset of darkness above the monument, there was no indication to the untrained eye that the Grianán may be aligned to the minor lunar standstill, occurring in October 2015.
I returned on the evening before Hunter’s Moon on October 7, mainly because there was a clear sky. And having been so delightfully distracted 28 days earlier by people truly interested in history, I also wanted to give my sad excuses of photographing the moon and a borrowed 70-300 mm lens another chance. As usual some people came, enjoying the sun setting behind the hills of Donegal with one fellow photographer attempting a hopefully successful time lapse of it. He left last as darkness fell. And so it was the Grianán, the moon and stars and me with not a single thought for any alignments based on the experience on the full moon past. 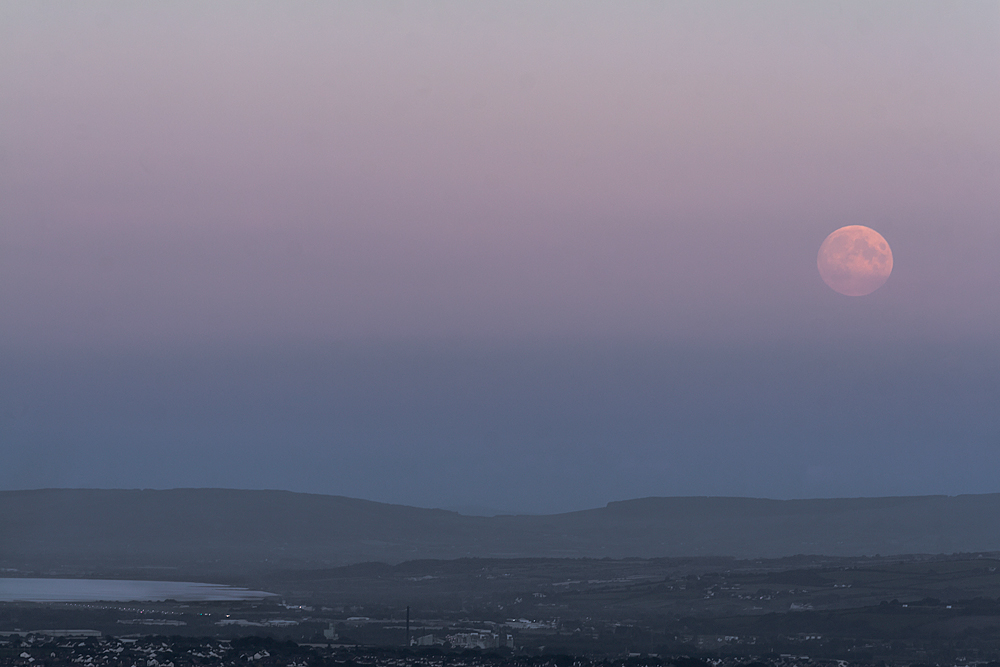 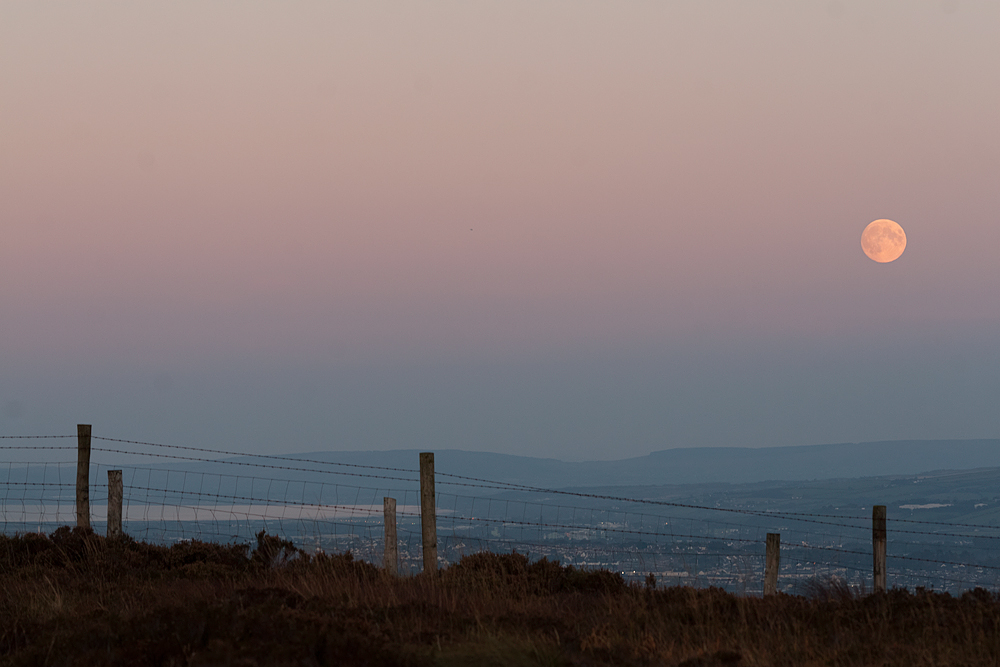 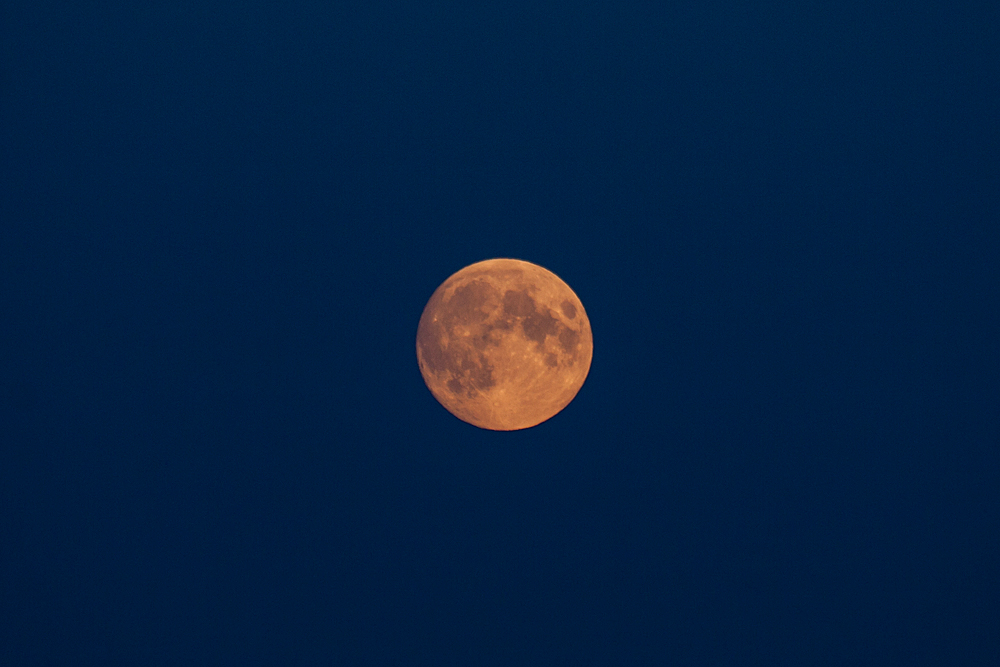 In between the struggle with a rarely used tripod and a small and fading torch, I noticed the reflection of the moon outside the entrance in a puddle and managed somehow to position myself before it was gone. What followed could not have come more unexpected – moonlight suddenly reached inside the monument, the beam being about 2 metres in length. 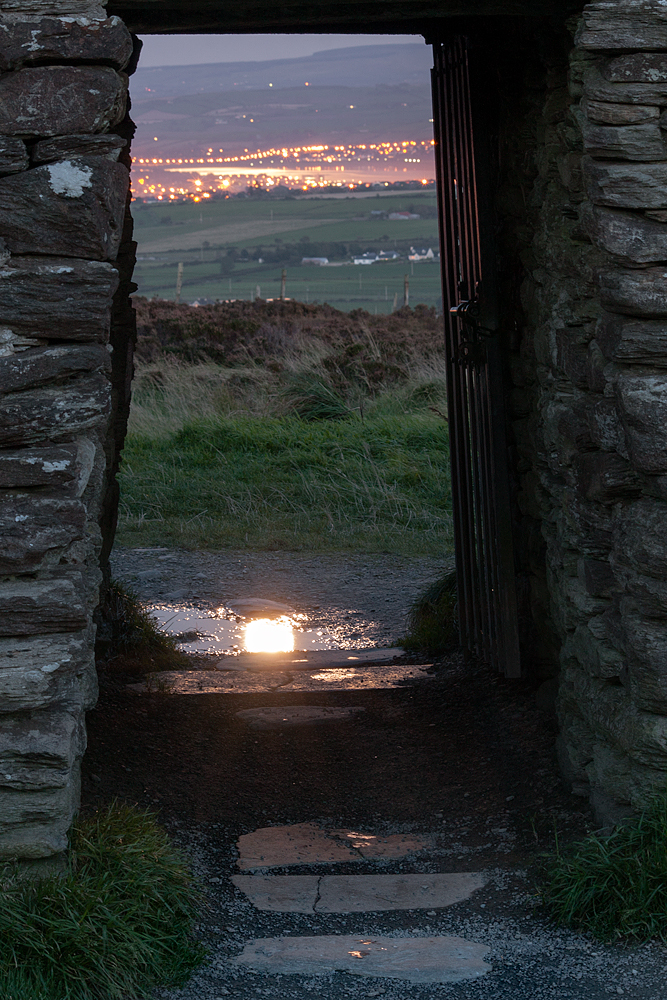 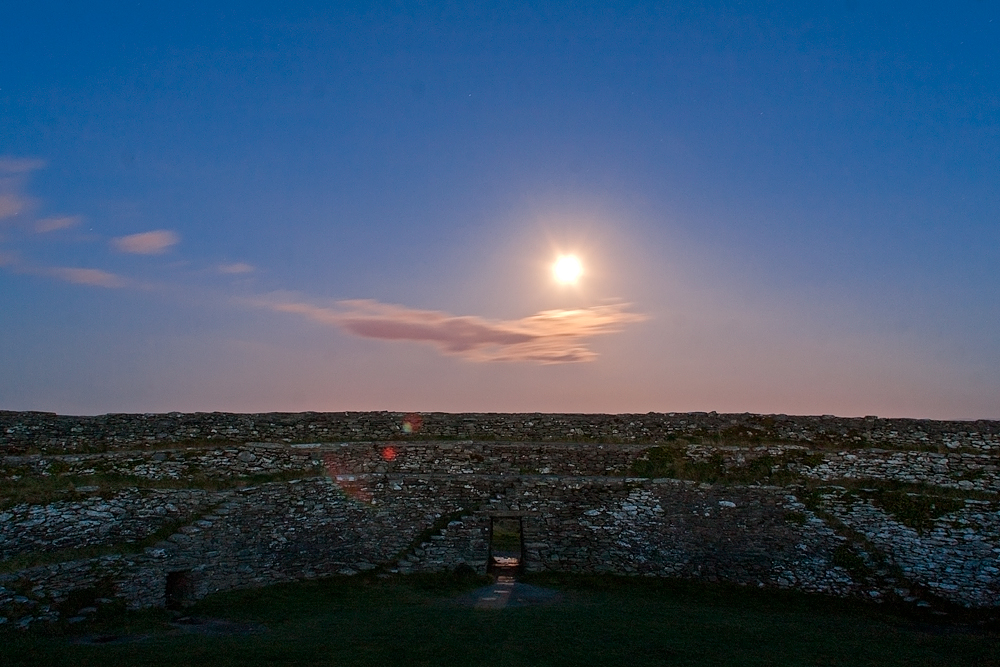 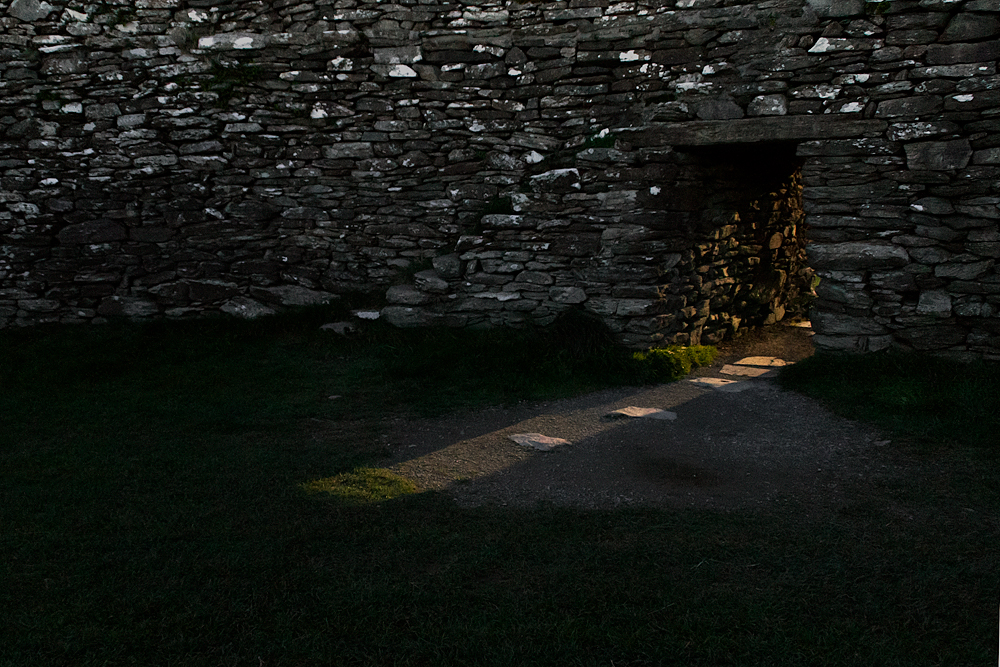 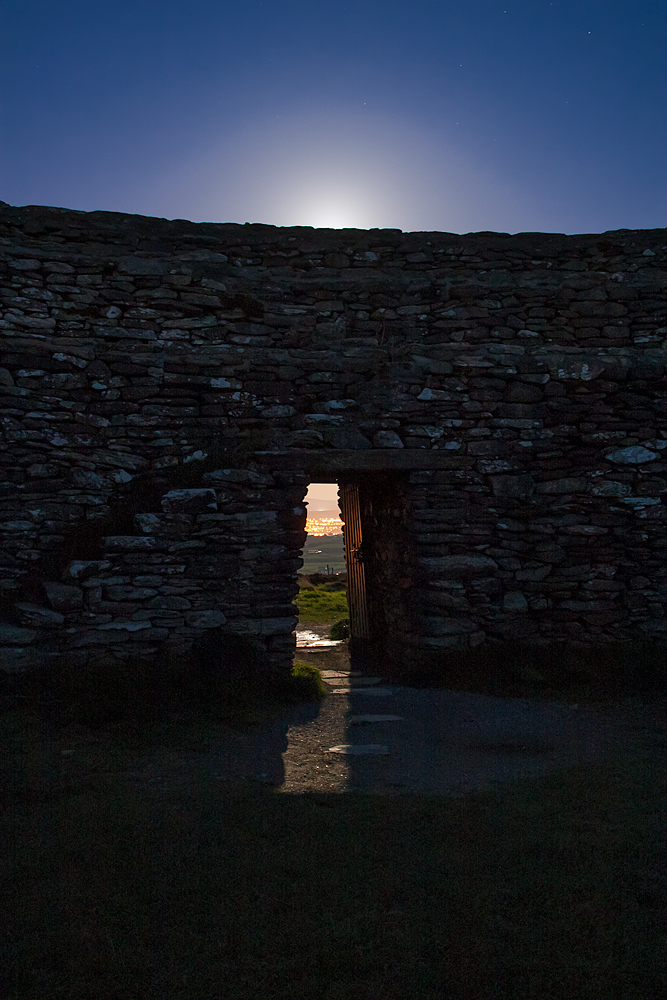 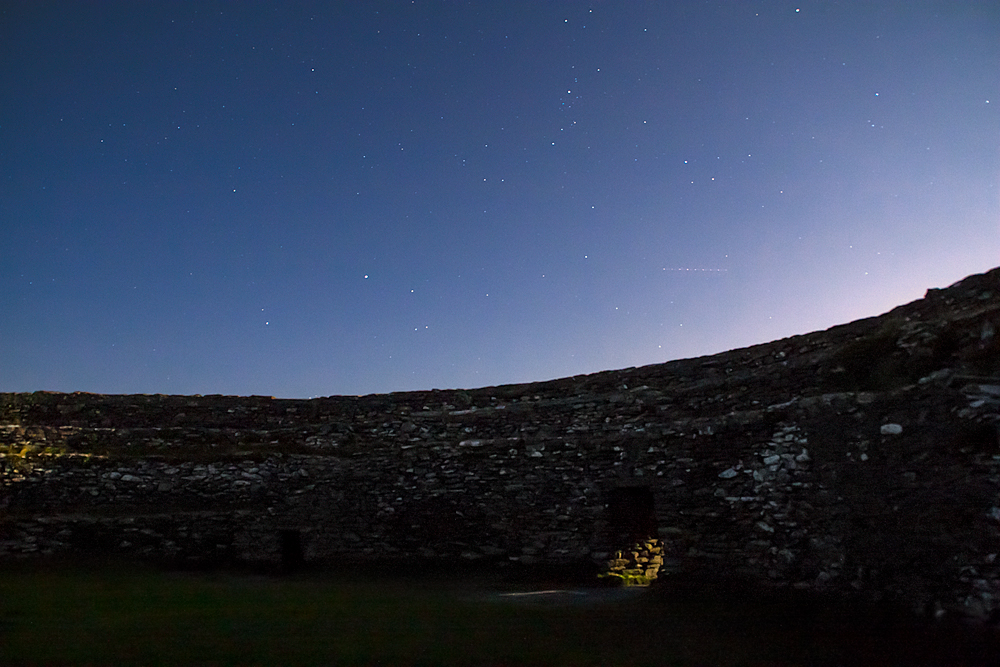 The light of the moon left the Grianán after one short hour and much in the same manner the sun had done on the morning of September 21. 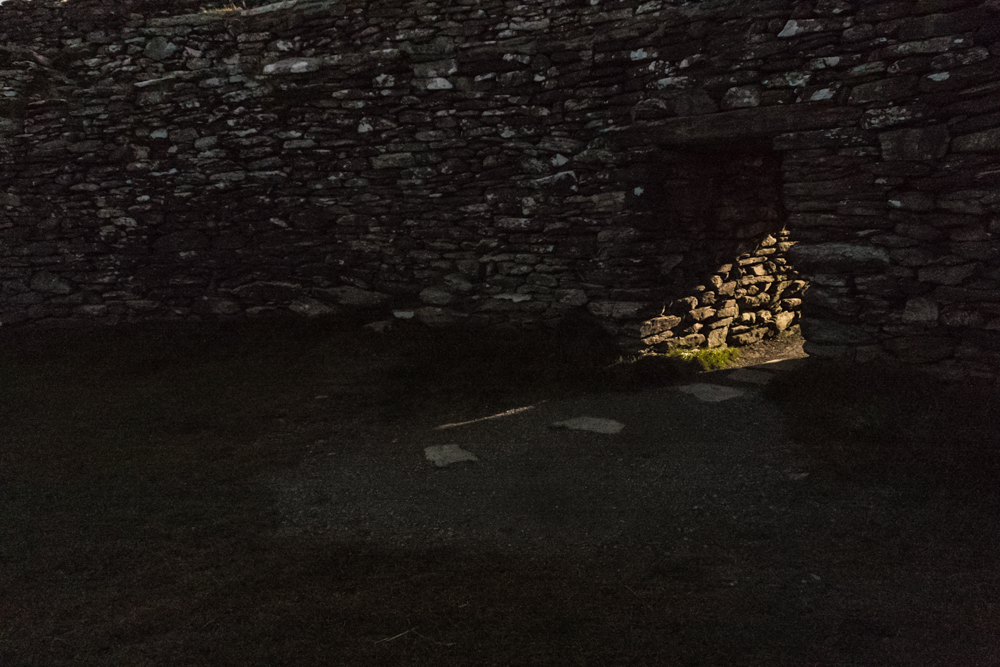 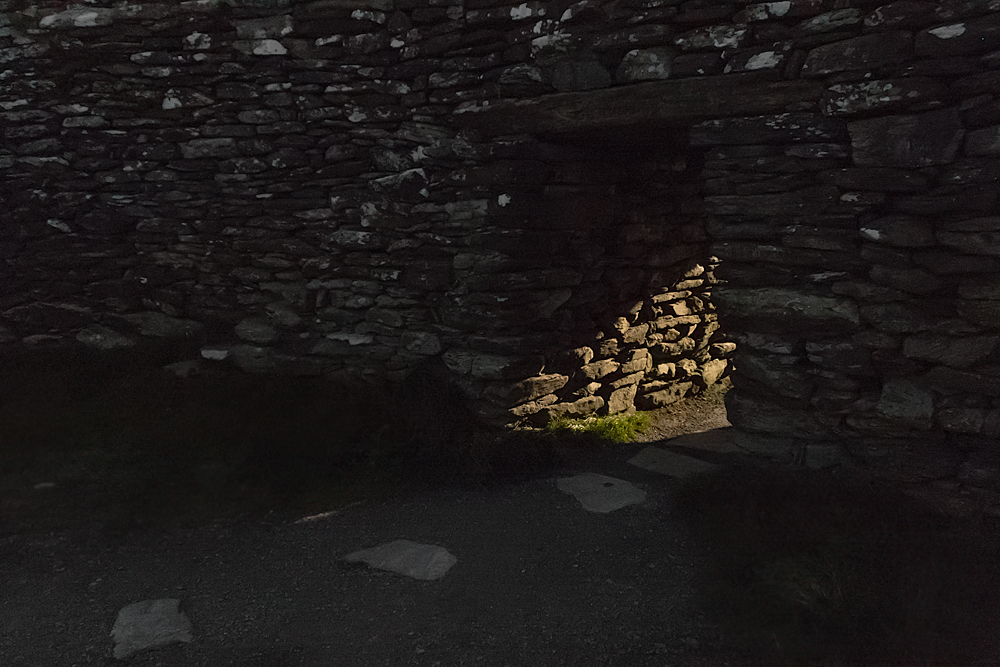 If what happened on Hunter’s Moon was not the strangest fluke of all than I have witnessed the very beginning of the lunar alignment at the Grianán and the beam of light should increase with every full moon until it reaches across the inside of the monument to the other side of the wall. At the moment it seem plausible that this date would fall at the October moon 2015 and that it will take another 12 months afterwards to retreat. It should reoccur again a year before the next minor lunar standstill in 2034.
If not seen (and seen again) it is difficult to believe the close similarities in appearance of the equinox and lunar alignment. They match each other nearly perfectly with just the intensity of light and time separating both.
The implications this lunar alignment might have are fundamental. It not only changes everything we thought we knew about this monument for it becomes now more and more impossible, that this was ever a residence for the living, no matter how royal, if aligned to the sun as well as the moon. It also may date the origin of the monument much further back then anyone could have possible imagine, to a time when the moon was dominant, predating any solar alignments. The equinox alignment as such may have been secondary. 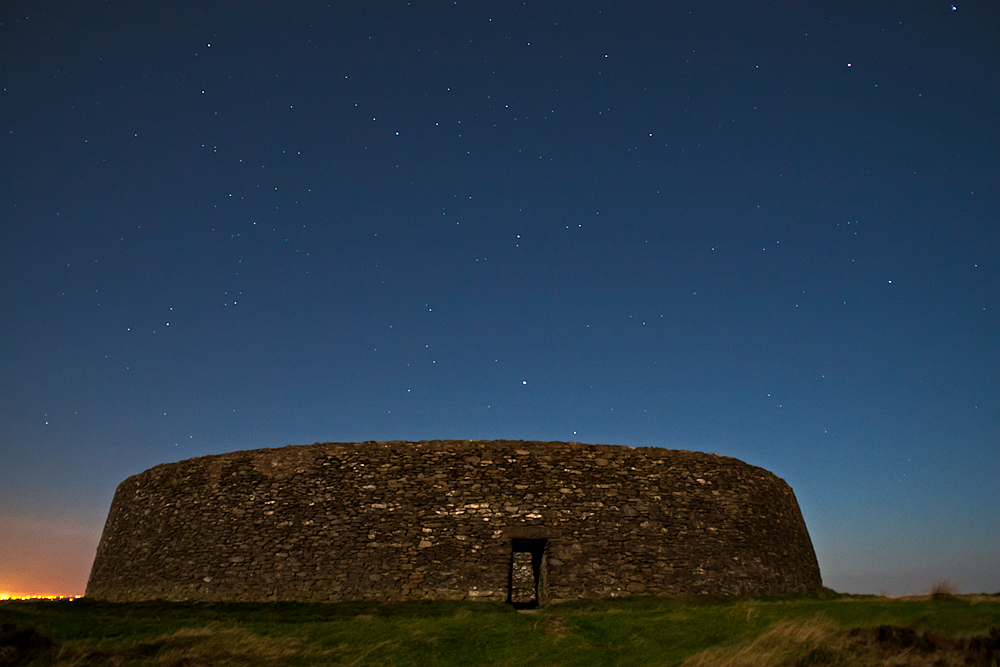 In the light of the moon, beneath the stars – the most amazing monument of them all.