On August 1st 1834 John O’Donovan wrote in his letter to Thomas Larcom:

“I went on Thursday to see the ruin of the work of Rigriu and Garvan on the summit of a hill which derives its name from the building. It is amazingly interesting, but to me wonderfully puzzling! Is it possible that this can be the ruin of the celebrated palace of Aileach? A palace called Grianan i.e. Solarium (not the Temple of the Sun) for its splendour and Aileach (Ail-theach i.e. Stone House) from its being built of stone, where the three sons of Kermad were disputing about the sovereignty when they were visited by Ith, the brother of the Spanish Milesius? Can this be the palace called Grianan Ailich, which was destroyed by the O’Brien in 1101? Petrie says unquestionable.

I made every enquiry about it in its vicinity but could discover nothing; all the neighbours have lost their traditions and their old language. They could only tell me that the hill was called Grianan Gormley, and the ruin, the Ould Fourth. I have been very much disappointed, but I do not give it up yet.”

Scrolling through pages and pages of elderly manuscripts at Irish Script on Screen in days of shades of grey, I came across a fragment, consisting of placenames from the territory of the O’Cahans, dated 17th century, in native hand and language. 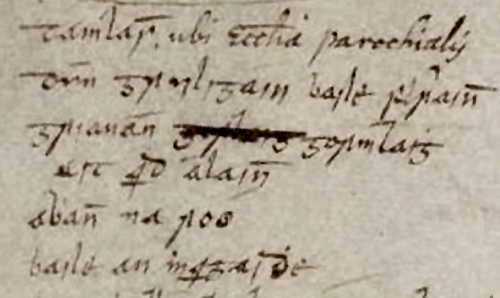 Tamlás could be todays Tummock and Dún Graigain Baile Fe(?)rain the townland of Lisfannon. (See Tracing the ancient route, part III)
I am uncertain of the line below Grianán Gormlaig. The first word appears to be uit, which could be Latin. If Irish, it means alas. First letter of the second word seems to be q (ceart). When spelled with a d as the ending letter, as perhaps indicated, its meaning is craftsman, craftsmanship, skill, etc. If this would proof, by some remote notion of fate, to be a rough interpretation of its original intent, than in the mind of the writer an utterly unheard of Alan was the builder of this monument, called Grianán Gormlaig, of which, of course, no further mentioning can be found in any of the available manuscripts.

In Celtica 1 from 1946, two articles appeared, seemingly an edited translation by Rev. Canice Mooney and ‘Notes on place-names in Derry and Tyrone’ by Séamus Ó Ceallaig, hopefully shedding some light on this issue but a copy of this enticing edition has yet to be found.

Addition:
I received an email from Jim O Dochartaigh on February 1, 2012

Bettina,
Sorry about delay. The symbol in the second word signifies ar, so the word is ard i.e árd álainn, beautiful hill. Not too sure about the first word. If it is asi with a bar on the i it could be asin, “from the”, if that makes sense. Incidentally,could the first word 2 lines above the gríanan line be tamhlacht (plague burial-ground); there is a Tamhlacht Árda in Derry, according to Dineen’s dictionary.
best of luck
Jim